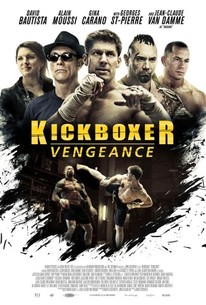 Finally, 27 years after unleashing Jean-Claude Van Damme on the world, Kickboxer, the martial arts franchise that refuses to die, is boldly rebooted with the supremely silly Kickboxer: Vengeance.

This lean, unpretentious entertainment delivers everything one might want from a film titled Kickboxer: Vengeance - including, at the last, an homage to the younger Van Damme's disco-dancing prowess.

"Kickboxer: Vengeance" isn't going to raise anyone's SAT score, but it's passable in the realms of kickboxing cinema and will hold your attention during late-night cable viewing.

While Moussi has ample skills as a fighter - and is plenty handsome to boot - he lacks Van Damme's charisma.

None of it ... comes within spitting distance of the original's highs, like its dance sequence, so awkwardly staged and poorly directed that it actually becomes charming.

Van Damme and Bautista are certainly the main reasons to watch Kickboxer: Vengeance, and help make it an enjoyable piece of old fashioned martial arts fun

This reboot takes itself far too seriously, and ends up being more of a dour experience, lacking in anything all that fun or memorable.

Maybe in the next one, we can cut out the middle man and watch Van Damme's Durand train someone with more personality than a cup of tapioca.

Kickboxer: Vengeance feels like a missed opportunity... It delivers more or less what it promises, and might have felt better if not for a vastly superior original property from which it cannot escape comparison.

Simply framed and refreshingly free of gimmicks, John Stockwell's film never gets distracted from the action - and there's plenty of that to enjoy.

Even in its best moments, there's nothing flashy, nothing memorable and certainly nothing smart about this purely B-movie remake.

Comparing this to the original would be a disservice to that film. This only shares characters and that's it, gone is the humour and fun. I give the people behind the scenes a lot of credit for trying something different but this film just lacks all the basics. That final fight is boring when it should of been full steam ahead, way too many poses. The story is so simplistically unoriginal, it really doesn't develop whatsoever during the running time. Po was a real villain but is forgotten here, Baurista is the best part of this film and they don't do anything interesting with him. Van Damme should of stayed well clear of this train wreck, the original just had way more heart and you can't compete with that.