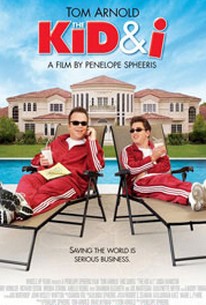 Critics Consensus: Well-intentioned but sappy, The Kid & I is a strange hybrid of comedy and cinema verite.

Critics Consensus: Well-intentioned but sappy, The Kid & I is a strange hybrid of comedy and cinema verite.

Critic Consensus: Well-intentioned but sappy, The Kid & I is a strange hybrid of comedy and cinema verite.

The Kid & I Photos

Bill Williams is a down-and-out actor who is unexpectedly hired to write a sequel a la "True Lies," the action film that made him famous more than a decade ago. When Bill learns that his co-star is Aaron Roman, a rich kid with no acting experience, what appeared to be the chance for a major comeback turns into a series of outlandish complications. As the duo embarks on a journey of outrageous misadventures, the unlikely pair discovers that it takes more courage to face real life challenges than it does fighting bad guys on the big screen. Although Aaron may be inexperienced in acting, his tenacious spirit, unwavering optimism and unconditional friendship turns out to be an important, enduring gift to Bill.

Jamie Lee Curtis
as Herself

Arnold Schwarzenegger
as Himself

Brianne Davis
as Marla
View All

Critic Reviews for The Kid & I

It's terribly uneven, it's far too corny and it's really not all that great, but it's so strange and so compelling that you have to see it.

It would be nice to say that The Kid & I delivers a heartwarming message of perseverance while showing a lighter side of Arnold and spotlighting a new star. Unfortunately, it would not be true.

Tom Arnold does have talent, but some self-defeating streak keeps him from using it.

What sets The Kid & I apart from most Hollywood comedies is its restraint, on the part of Arnold, both as writer and actor, as well as Spheeris. Comedy actually grows out of character and situation.

This wan attempt at inspirational comedy doesn't bother to look closely at anything.

Tom Arnold wrote and stars in this heart-on-sleeve "comedy" that will go down in cinema history as one of the most awkward additions ever made to the genre.

Works most poignantly as a testament to a father's love and an unapologetic celebration of Hollywood's m.o.

Has straight-to-DVD written all over it.

Imagine if Tom Arnold had written "Adaptation." No, really.

With the exception of some weird-on-purpose flicks such as those by Jim Jarmusch and David Lynch, "The Kid & I" is arguably the weirdest movie I've seen since 1987.

It isn't perfect but it is so oddly sincere that I found myself growing a sort of affection for it even as all common sense was telling me to think otherwise.

Audience Reviews for The Kid & I

Cute and touching movie - but it was weird and seemed like it was made just like the movie in the movie...if that makes sense...

The Kid & I Quotes