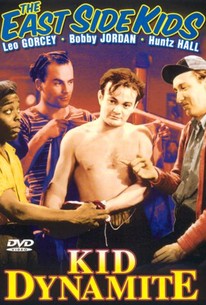 Nothing happens in the "East Side Kids" opus Kid Dynamite that isn't repeated at least three times, just in case the audience missed the point. It all starts when Muggs (Leo Gorcey), leader of the gang, is abducted by gamblers to keep him from fighting in a high-stakes boxing match. Muggs mistakenly believes that his rival Danny (Bobby Jordan) was responsible for the kidnapping, and wages a film-long campaign to humiliate Danny in public. Having promised his mom that he won't fight Muggs, Danny is perceived to be a coward by the rest of the gang. The inevitable showdown between Muggs and Danny segues unexpectedly into an outburst of wartime patriotism for all concerned. Incidentally, Muggs' partner in the mid-film dancing contest is played by Kay Mavis, soon to become Mrs. Leo Gorcey.

Mike Riley's Orchestra
as Themselves
View All

There are no critic reviews yet for Kid Dynamite. Keep checking Rotten Tomatoes for updates!

Leo Gorcey as the head of an inner-city gang, circa early 1940's, and pretty much of a dictator. He is always in the middle of a crowd telling the others what to do. The gang don't say anything back to him. They daren't, because he doesn't like any backtalk. Only 2 speak to him: Huntz Hall as the gang's court jester, and nobody takes him seriously. And Bobby Jordan plays Gorcey's second, and that's a miserable job because Gorcey fears him, and punishes him for that. This film is about watching Jordan take huff from Gorcey ... until he decides not to anymore. It's not bad. At the end everyone joins different branches of the Armed Forces, I guess as the great equalizer or something.