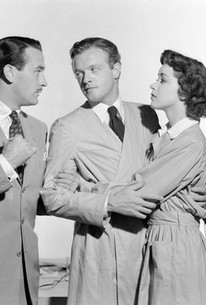 Kid Glove Killer is an expanded remake of They're Always Caught (1938), a 2-reel entry in MGM's "Crime Does Not Pay" series. Van Heflin stars as criminologist Gordon McKay, at present investigating the murder of of reform mayor Daniels (Samuel S. Hinds). What the audience knows, but McKay doesn't, is that the the culprit is district attorney Gerald Ladimer (Lee Bowman), ostensibly a crusader against organized crime. Thickening the plot is the fact that McKay and Ladimer are rivals for the affections of McKay's pretty lab assistant Jane Mitchell (Marsha Hunt). The question: Will McKay be able to piece together the fragmentary clues in his forensic lab before Ladimer is able to strike again? An excellent example of MGM's "B" unit at the height of its powers, Kid Glove Killer served as the feature-film directorial debut of Fred Zinnemann, who obviously was destined for bigger things.

Lee Bowman
as Gerald I. Ladimer

One of those moderately-budgeted programmers that appear at long intervals to rise far above the level intended.

A first-rate job all round.

Fred Zinnemann's feature debut, a neat, unpretentious and really rather enjoyable whodunit about the hunt for the killer of the town's crusading mayor.

Despite having a solid role from Van Heflin, its plot about corruption and murder never escapes the common grounds of B-movie film noir. [Full review in Spanish]

A terrific debut film for both Van Heflin and for Fred Zinnemann in the director's chair.

The taut plot is well served by the style of documentary fiction Zinnemann applied to a few of his earlier films.

It's the kind of film only television now makes, but this one's a beaut and hard to beat.

There are no featured audience reviews yet. Click the link below to see what others say about Kid Glove Killer!