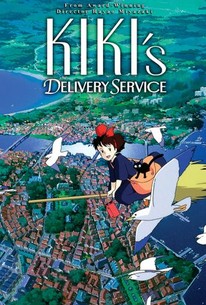 Critics Consensus: Kiki's Delivery Service is a heartwarming, gorgeously-rendered tale of a young witch discovering her place in the world.

Critics Consensus: Kiki's Delivery Service is a heartwarming, gorgeously-rendered tale of a young witch discovering her place in the world.

Critic Consensus: Kiki's Delivery Service is a heartwarming, gorgeously-rendered tale of a young witch discovering her place in the world.

Veteran animator Hayao Miyazaki directs this buoyant children's adventure yarn about a young witch striking out on her own. At her mother's behest, 13-year-old Kiki sets out on a year-long apprenticeship with her black cat in tow. With a shaky command of her broom, she ends up in a charming little coastal town that looks like a cross between the French provincial and San Francisco. Unfortunately, the local hotels have a strict "no witches" policy and the police have taken a dim view of her recent aerial mischief-making. She's saved from the street by a kindly baker's wife, who offers her room and board in exchange for her delivering by broom the baker's wares. Soon she befriends a college-aged artist, an old women who fusses over her, and a boy her same age who is nursing a massive crush. All is well until she wakes up one day and realizes that she can't make her broom levitate nor can she talk to her cat. What will Kiki do? ~ Jonathan Crow, Rovi

The House with a Clock in Its Walls Might be a Little Too Creepy for Young Kids
David Duchovny Set to "Hulk" Up?
Special "Delivery" From Disney

Miyazaki conjures a pubescent fable out of whole cloth that both kids and adults will enjoy immensely, and with the late Phil Hartman on board as Kiki's wiseacre feline familiar, there's many more comic moments than in the director's later work.

Kiki's slow pace and light-on-conflict plot may surprise kids... but it's difficult not to be won over by the film's endearing characters and beautiful animation, as well as a storyline that stresses the values of independence and friendship.

The film becomes a benign guided tour of femininity ... gently broaching universal coming-of-age issues such as independence, insecurity, and even - more boldly than any Western children's movie would contemplate - sexuality.

A terrific alternative to the diabetic's nightmare that is most of Disney's output, Kiki's Delivery Service takes pride of place in Miyazaki's exceptional body of work.

"Kiki's Delivery Service" is more than a place to park the kids for two hours - it is a surprisingly moving celebration of the animator's art that deserves a wider audience.

One of Miyazaki's most fanciful stories, Kiki's Delivery Service may seem on the surface to be just another simple, heartwarming fantasy tale, but it has some serious undertones that can't be easily dismissed.

Kiki, like My Neighbor Totoro, is simply delightful in most every way - the characters are sweet and memorable, there is a bit of action, and it is consistently funny.

It's a delightful tale of a young witch coming of age, learning to recognize her own talents, and striving to serve her community.

The first aspect that the producer pampered to extraordinary limits was the plastic beauty of the animation. [Full Review in Spanish]

An average Miyazaki film that doesn't develop so well its many elements into a cohesive narrative as it should - like for example the character's sudden loss of power and her inability to make friends. The result is amusing, even if not that satisfying.

even in the fantastical miyazaki gives us a realistic female character, something more true to life and down to earth than the princesses we normally get from animation with female leads. this film is a bit more reductionist than some of his better known films, and it moves a bit more slowly, but the story plays out as a bit of an allegory to the experience many of us have when looking at real life for the first time. the conversation between kiki and the girl at the cabin in the woods towards the end is something that just about all people can relate to, and it puts this film and life in general in genuine perspective. not as provocative as some of miyazaki's best films, but still good.

The first film by Hayao Miyazaki that I saw. It's still his most purely enjoyable film and features one of his best heroines.

Its cute, entertaining, beautifully animated, and perfect for the entire film. Kirsten Dunst does a great job in her first film as Kiki, and Phil Hartman does a great and funny performance in one of his last roles as her cat Gigi