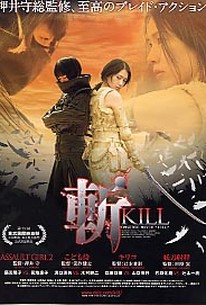 There are no critic reviews yet for Kill (Kiru) (Rebellion: The Killing Isle). Keep checking Rotten Tomatoes for updates!

At around 20 minutes, each of the 4 segments is stand alone from one another, which means this 80+ minute picture isn't one continuous movie. There is something fresh to see every 20 or so minutes.

Takanori Tsujimoto begins things off with Kiriko. Miki Mizuno starts off the killing and Ayaka Morita finishes it off. The story is simple and the action is high octane swordplay. 4 stars.

Kenta Fukasaku's Kodomo Samurai has the most emphasis on story and character. It is also told in the form of a black and white silent movie with a narrator narrating the story and providing the voices for all the characters. The action at the end is in the hack and slash samurai style. 3 stars.

Minoru Tahara's Zan-Gun has a simple story with some decent action. Thanks to the story, this segment has the most unique weapons of the bunch. Sword guns! 3.5 stars.

The finale is Mamoru Oshii's Assault Girl 2. At under 20 minutes, this is the shortest of the bunch. There is also no dialogue, some cheap CG, and only 2 characters. Still, Oshii's segment looks to be the most professional. It is also hard to complain when the only 2 actors are the beautiful Yoko Fujita and Rinko Kikuchi. 4 stars.

In the end, each segment has its own strengths, which makes this a film worth checking out.