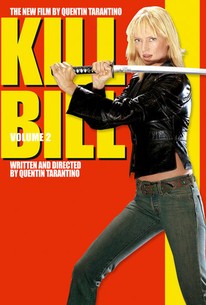 Critics Consensus: Kill Bill: Volume 2 adds extra plot and dialogue to the action-heavy exploits of its predecessor, while still managing to deliver a suitably hard-hitting sequel.

Critics Consensus: Kill Bill: Volume 2 adds extra plot and dialogue to the action-heavy exploits of its predecessor, while still managing to deliver a suitably hard-hitting sequel.

Critic Consensus: Kill Bill: Volume 2 adds extra plot and dialogue to the action-heavy exploits of its predecessor, while still managing to deliver a suitably hard-hitting sequel.

Quentin Tarantino's sprawling homage to action films of both the East and the West reaches its conclusion in this continuation of 2003's ultra-violent Kill Bill Vol. 1. Having dispatched several of her arch-enemies in the first film, The Bride (Uma Thurman) continues in Kill Bill Vol. 2 on her deadly pursuit of her former partners in the Deadly Viper Assassination Squad, who, in a furious assault, attempted to murder her and her unborn child on her wedding day. As The Bride faces off against allies-turned-nemeses Budd (Michael Madsen) and Elle Driver (Daryl Hannah), she flashes back to the day of her deadly wedding, and we learn of how she was recruited to join the DiVAS, her training under unforgiving martial arts master Pai Mei (Liu Chia-hui), and her relationship with Squad leader Bill (David Carradine), which changed from love to violent hatred. Originally planned as a single film, Kill Bill grew into an epic-scale two-part project totaling more than four hours in length; as with the first film, Kill Bill Vol. 2 includes appearances by genre-film icons Sonny Chiba, Michael Parks, Larry Bishop, and Sid Haig; Wu-Tang Clan producer and turntablist RZA and filmmaker and composer Robert Rodriguez both contributed to the musical score. ~ Mark Deming, Rovi

Sid Haig
as Jay the Bartender

Vivica A. Fox
as Vernita Green

n the hyper-kinetic Kill Bill 1 you didn't know when the end happened, in Vol 2 you often wish the proceedings could hurtle to the finale, fast.

Vol. 2 fills in the motivational and emotional blanks that left the first movie tasting like a meal made only of appetizers.

I don't even want to do Tarantino and his pathetic accomplices the honour of recounting the narrative of the second "volume" of this exercise in trashpedalling, and frankly I don't need to, because there isn't a plot to speak of.

Where KB1 had the pace of an ADHD six-year-old on a sugar high, KB2 has been Ritalinized, its tempo slowed to a crawl in self-conscious, and self-defeating, imitation of Sergio Leone. It's two hours that feel like five.

If Kill Bill - Vol. 1 was like a roundhouse kick to the head, Vol. 2 is practically a warm hug.

The sequel is the more potent package of the two.

Kill Bill is not a critique of sadistic bullying, it revels in it. ... The film itself is oppressive and bullying, as well unpleasantly pleased with itself.

Not as electric as the first part, yet Tarantino excels by entertaining you with more words than punches. David Carradine is fantastic in quite the juicy, memorable role. [Full review in Spanish]

Carradine is fantastic as Bill, while Thurman deserves consideration for an Academy Award nomination with her performance as the Bride.

Tarantino's attempt to inject a more solemn tone as the narrative reaches its climax creates an awkward mesh with the proceeding pulpiness.

To watch a Tarantino film is to surrender wholeheartedly to his giddy genius, and this, his magnum opus, is no exception.

Not as brutal, bloody as the first but still has plenty of good fights. Shows how she trained to become an assassin and fills in the missing pieces from the first.

A bit of an improvement over its first half, but not by much. But i was impressed with some of its character work and David Carradine`s magnificent performance which made the film.

A more laid back not as quite as violent as the first but a solid finish to a nice tale. The entire why of volume 1 is laid out for you in a great finish.