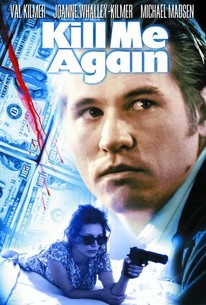 In his film debut, novice director John Dahl (who would later make The Last Seduction), weaves a quirky tale of love, murder and deception. Jack Andrews (Val Kilmer), a seedy private detective is hired by Fay Forrester (Joanne Whalley-Kilmer), to help her fake her own death in a clever scheme to escape from her mob pursuers, whom she double-crossed stealing money she had been sent to pick up, and are now intent on killing her. There then ensues a series of complicated plot-twists, double-crosses and surprises as Fay and Jack race each other to escape the mobsters, who have found them, and to get the money before the other does.

Critic Reviews for Kill Me Again

Madsen's over-the-top nasty performance as a crazed killer gets your attention, in a film that feels less than filling just five minures after seeing it.

Audience Reviews for Kill Me Again

There are no featured audience reviews yet. Click the link below to see what others say about Kill Me Again!