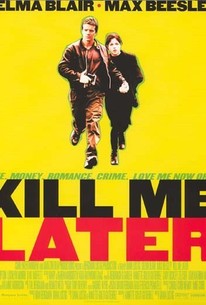 A woman finds love when all she wanted was a quick and painless death in this dark comedy-drama. Shawn (Selma Blair) is a deeply depressed young woman who is unhappy with her job as a bank teller and is frustrated with her romantic relationship with her boss (D.W. Moffett), who happens to be married. Deciding there's no reason to go on, Shawn climbs to the roof of the bank and steels her nerve to leap to her death. But before she can jump, a novice bank robber named Charlie (Max Beesley) stages a hold-up at the bank, taking Shawn hostage in the process. Charlie and Shawn are soon trapped in the bank, and Charlie asks Shawn to help him escape; she agrees, but only under the condition that he kill her later. He agrees, but after they make their getaway, Charlie finds himself increasingly attracted to Shawn and isn't so sure he wants to see her dead, while Shawn is similarly intrigued with Charlie and decides to join him in his life of crime. Kill Me Later received its premiere at the 2001 Santa Barbara Film Festival.

Alex Zahara
as Off. Larry

Juan Gonez
as Mariachi No. 1

Octavio Carillo
as Mariachi No. 2

Mario Valdez
as Mariachi No. 3

Jeff Seymour
as Officer in Charge

RABBIT
as Himself
View All

Critic Reviews for Kill Me Later

By the end of it, you'll wish you had just stayed home and watched Total Request Live.

Badly employing all kinds of tricks ... [Lustig] ultimately overpowers her actors and does in her own film.

Happily the filmmakers here are more interested in its people and their lives than in the chase that follows.

The kind of quirky film the movie world could use more of in these days of cookie-cutter studio pictures.

The performances in several smaller roles are so mechanical that they lend Kill Me Later the tone of a vanity production.

It's a good thing people finally recognized Selma Blair's talent so she could stop making movies like this.

...about an hour after it's over, you'll barely remember what it was about.

A long-on-style-short-on-insight mish-mash... the filmmakers trade on credit they haven't earned, hoping you'll fill in the narrative gaps.

Dana Lustig has taken a fairly heavy-handed approach, treating the material as if it were the basis of a longform music video ...

Plausibility is a problem with this would-be-giddy antic about newfound lovers on the lam.

A small film whose virtues are probably best appreciated on tape.

Audience Reviews for Kill Me Later

This movie was really entertaining to watch. Selma Blair was great as a woman drowning in depression and hopelessness. The sense of overwhelming blackness that surrounds the character is very believable. Max Beesley was perfectly charming as the bumbling robber. This movie was not intended to be academy award caliber, just to make you smile and share in a romantic fantasy