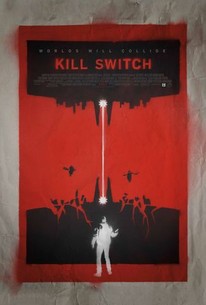 Acclaimed writer-director Tim Smit explodes on to the scene with his futuristic, VFX-heavy feature debut! KILL SWITCH charts the story of a pilot battling to save his family and the planet, based on Smit's short What's In The Box? Set in a future version of the world, the video game style plot follows an experiment for unlimited energy, harnessing parallel universes, which goes wrong. Chased by drones and soldiers, pilot and physicist Will Porter must race through an imploding world to get the Redivider box to a tower, which will save humanity, including his family, in the real world.

Dan Stevens
as Will Porter

The worst kind of science-fiction film: the kind that coasts on a central gimmick instead of delivering either visceral or intellectual thrills.

Imagining the imminent end of the world has been boring for years now in movies, and the low-budget sci-fi thriller "Kill Switch" is no exception.

A pointless gush of science-fiction bilge.

"Kill Switch" might have been the next "Primer" or "District B13," but instead it feels like a demo reel for a game that nobody can play.

An ungainly hybrid of two totally disparate mediums that have been Human Centipede-d together: film and first-person-shooter video games. Film is not the front end of this configuration.

Dan Stevens navigates the film's literal and thematic alleyways with the same enthusiastic befuddlement that convinced many to soldier through Legion's more impenetrable stretches.

Stevens and the other actors are quite good, but the film doesn't quite match their abilities.

The parallel world created in Kill Switch may not be devoid of life, but it might as well be.

There is something fascinating in this film, but it can't make up for all that's wrong with it.

Kill Switch...is another example of why video game-style films don't make the best of movies-because they simply aren't good.

The paper-thin plot doesn't help either.

But no high-concept premise saves this from looking like a long, confusing aerobics video, with Porter running and evading men and killer drones as plot exposition tumbles out of his mouth in between breaths.

The film begins with an interesting idea and concept but it proceeds to drag way too long. Stevens is a good actor but this film doesn't hit the bests like it should, the camera setups are tiresome and the first person adds nothing. This is the third film I've watched with this first person narrative and the style never really works. The action scenes are interesting but empty, you really can't feel anything for the characters because you are the character. Why have an actor if you plan on neglecting him behind the camera? This type of filmmaking is a gimmick, much in line with handheld filmmaking. They could've made a really out there film and had intetesting characters but the gimmick robs the film of any emotion. If you want true first person, why not play VR? Not a good film and a really frustrating one to watch. 12-06-2017.

Much better than I expected having never really heard anything about it except one trailer that looked ok, I was pleasantly surprised how good the effects were too, The story was very good maybe a little over the top but it worked well, The action was pretty entertaining plus adding the first person view was fun too it was like a game it even had a health bar and a HUD at times, The acting wasn't great and It did get predictable at the end but overall I was enjoying what was on the screen and that's all that matters to me.