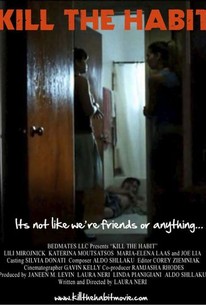 There's nothing that brings people together like manslaughter, as filmmaker Laura Neri demonstrates in this independent dark comedy. Galia (Lili Mirojnick) has a serious substance abuse problem, and with a stressful family gathering taking place in two hours, she pay an urgent call to her drug dealer Lyle (Joe Lia) to buy enough dope to get her though the day. However, Lyle is not happy to see Galia; they get into an argument that turns violent, and she accidentally kills him. Galia discovers a large amount of cash and realizes she has a dead body to take care of as well. Galia calls her best friend Soti (Katerina Moutsatsos) to help her get rid of Lyle's body, but while they're hatching a plan to take care of the corpse, the cash and the drugs, they realize someone is in the bedroom -- Cardamosa (Maria Elena Laas), Lyle's wife. Cardamosa didn't like Lyle and isn't especially concerned that he's dead, but she's convinced she's entitled to a share of his loot, and the three woman hash out a wary partnership as they divide the spoils and hide the body before Galia has to be back at her mom's house. Kill The Habit was an official selection at the 2010 Cinequest Film Festival.

Critic Reviews for Kill The Habit

There are no critic reviews yet for Kill The Habit. Keep checking Rotten Tomatoes for updates!

There are no featured reviews for Kill The Habit at this time.