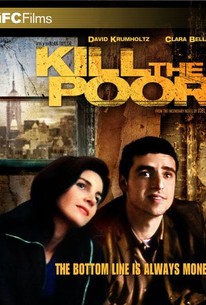 The down-and-dirty side of building management in pre-gentrification Manhattan sets the stage for this dark comedy. It's 1981, and Joe Peltz (David Krumholtz) runs a newsstand in New York City, where he has recently married Annabelle (Clara Bellar), an exotic dancer from France who isn't in love with Joe but asked for his hand so she could get a Green Card. When Annabelle discovers she's pregnant, the couple decides they need a larger apartment, and Joe finds a flat in the East Village that's on the same block where his great-great-grandparents lived when they first came to America. However, the neighborhood is decaying and ridden with crime, and when Joe and Annabelle move into their new apartment, he's immediately drafted onto the building's co-op board, where he has to deal with a variety of eccentrics of various stripes and must often sleep in the lobby armed with a baseball bat to ward off junkies and burglars. But by far his biggest problem is Carlos DeJesus (Paul Calderon), a bully who has been squatting in the building for eight years with his roughneck teenage son, Segundo (Jon Budinoff). Carlos sees no reason why he should start paying rent, and he's made enemies with practically everyone who lives in the building, wasting no time in adding Joe and Annabelle to that list. So when a gasoline fire guts Carlos' apartment, the question is not who wanted him out, but who actually had the nerve to start the blaze. Based on a novel by Joel Rose, Kill the Poor was written for the screen by Daniel Handler, best known as the author of the popular "Lemony Snicket" books.

Angel Santiago
as Friend of Segundo

Critic Reviews for Kill the Poor

In spite of its oddities, [Kill the Poor] pulls off a memorable story.

Can utopian ideals survive such a mugging by reality?

Nowhere near as provocative as its title might imply.

KILL the Poor is sort of a poor man's Rent - - minus the music and the AIDS - - and much blander than the title would have you expect.

This lukewarm riff on gentrification and its discontents resurrects the low life and tough times of Alphabet City in the early 1980's.

A movie with more character than narrative, it's a showcase for the actors, but the storyline could have used some urban renewal.

Alan Taylor's film will resonate with any New Yorker who's played real-estate roulette in Fun City.

Shot on a modest DV budget, Kill the Poor isn't pretty, but it's a balanced look at the dirty politics of gentrification.

Audience Reviews for Kill the Poor

There are no featured audience reviews yet. Click the link below to see what others say about Kill the Poor!