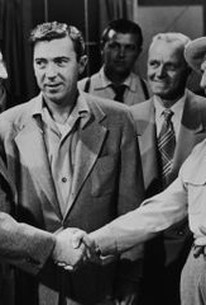 William Bendix is perfectly cast as a diehard baseball fan who hates umpires with every fibre of his being. Bendix' devotion to baseball has lost him job after job, so his father-in-law (Ray Collins)--who happens to be an umpire--forces Our Hero to enroll in umpire school. Eventually Bendix learns to respect his new job, even gaining a measure of popularity by earning the nickname "Two-Call Johnson" (the result of double vision brought about by an overdose of eye drop medicine). But when Bendix calls a play against a popular pitcher, he is accused of cheating by the angry fans. Forced to disguise himself to get to the Big Game, Bendix arrives at the ball park to a chorus of "boos." Exonerated by the pitcher, who praises the umpire's honesty, Bendix is the hero of the day...until he makes another unpopular call two seconds later. Kill the Umpire is climaxed by a zany chase sequence scripted by former cartoon director Frank Tashlin.

Critic Reviews for Kill the Umpire

There are no critic reviews yet for Kill the Umpire. Keep checking Rotten Tomatoes for updates!

There are no featured reviews for Kill the Umpire at this time.