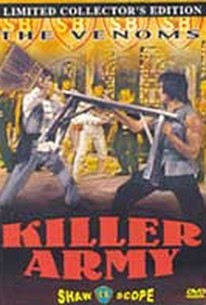 Chang Cheh directs this period action flick about a band of half-starved kung-fu aces who are fleeing a murderous band of thugs. All hailing from the same province, the martial arts masters soon become blood brothers while at the same time getting deeper and deeper embroiled in the political turmoil of the place where they have taken refuge. Accused of plotting an assassination, they are saved by the founder of a martial arts school only to be betrayed. Fleeing once again from their enemies, the group decides to join the rebel guerrilla group in order to clear their names. Shaw Brother veterans Phillip Kwok Tsui, Lo Meng, and Chiang Sheng star. ~ Jonathan Crow, Rovi

There are no critic reviews yet for Killer Army. Keep checking Rotten Tomatoes for updates!

There are no featured audience reviews yet. Click the link below to see what others say about Killer Army!