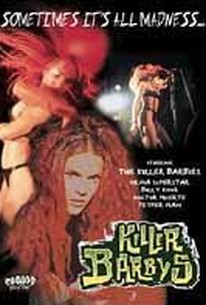 Euro-horror master Jesús Franco directed this oddball blend of terror, comedy, and music video. The Killer Barbys are a flashy and trashy hard rock band out on the road. En route to their next show, they find themselves hopelessly lost and are forced to take shelter at the estate of Countess Von Fledermaus (Mariangela Giordano). While the Countess seems like a pleasant enough host, the band discovers she has a deadly secret -- she feeds on the blood of strapping young men to stay young and vital, and lead singer Silvia Superstar is soon forced to save her male bandmates from the clutches of the Countess. The Killer Barbys also features Carlos Subterfuge and Pepa Lopez. ~ Mark Deming, Rovi

There are no critic reviews yet for Killer Barbys. Keep checking Rotten Tomatoes for updates!

There are no featured audience reviews yet. Click the link below to see what others say about Killer Barbys!