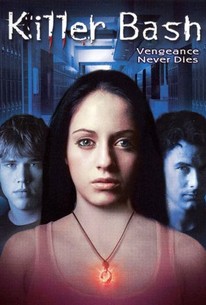 A murdered college misfit returns from the other side to seek vengeance on the sons of his unrepentant killers, and his approach is deadly seductive in a supernatural thriller from director David Decoteau. It was thirty years ago that college outcast Robert Hyde was killed by five members of the Delta fraternity, and now that a generation has passed Robert is ready to avenge his untimely death. These days, the sons of the men who staged Robert's death are the big men on campus, and Becky Jekyll (Raquel Riskin) is the homely campus misfit. When Robert takes possession of Becky's body, her sudden transformation into a sorority swan finds her quickly gaining access to all the in-crowd events. As the biggest party of the year gets under way, Becky struggles to figure out exactly what's happening to her before her murderous instincts overpower her better judgment.

Greyston Holt
as Greg
View All

There are no critic reviews yet for Killer Bash. Keep checking Rotten Tomatoes for updates!

There are no featured audience reviews yet. Click the link below to see what others say about Killer Bash!