Killer Condom: The Rubber That Rubs You Out (1996) 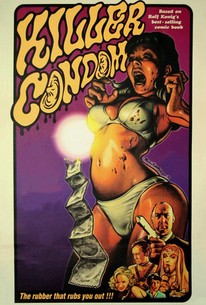 Killer Condom: The Rubber That Rubs You Out Photos

Safe sex just got a lot more dangerous in this purposefully outrageous comedy from Germany. A college professor, Mr. Smirnoff (Ralf Wolter) lures an attractive female student, who is willing to do just about anything to improve her grade, to New York's Hotel Quickie, where he avails himself of one of the free condoms provided by the management. However, the prophylactic in question has sprouted teeth and has a taste for blood, and before long, the prof is suddenly missing a penis. Assigned to investigate this strange case is detective Luigi Mackeroni (Udo Samel), a gay policeman who just transferred from Sicily and is a little lonely in his new home. When Luigi and Billy (Marc Richter), a good looking hustler, decide to repair to the Hotel Quickie for some fun and games, the detective himself is attacked by the carnivorous rubber (though his injuries are considerably less than those suffered by Prof. Smirnoff). Now much better acquainted with his new nemesis, Luigi has to convince his partner about the menace of the killer condoms, while in his spare time, he tries to brush off the uninvited advances of burly transvestite Babette (Leonard Lansink). Kondom des Grauens, released in the United States by Troma as Killer Condom, was based on a comic book by German cartoonist Ralf Koenig, who also wrote the screenplay. ~ Mark Deming, Rovi

Critic Reviews for Killer Condom: The Rubber That Rubs You Out

The humour is surprisingly witty and just on the right side of crude...The critique of the police and the politics of prioritizing high profile cases while simultaneously diminishing or disregarding the lives of at-risk peoples...is...still very timely

too bad it takes itself so seriously

Audience Reviews for Killer Condom: The Rubber That Rubs You Out

Usually with a title like "Killer Condom" the general census would be to skip it. Not for me while I do like watching good films I like a departure on things every once in awhile. I had originally was going open this review in a more comedic style. I wrote down a joke about virginity, but I lost it. Oh well. So Killer Condom begins with a vice principal taking one of his student with him to hotel "Quicky" and makes her have sex with him if she wants to graduate. The vice principal then presume to take out a "contraceptive dispenser" and then it gets eaten off. Then it cuts to a police station where first see our hero Detective Luigi Mackaroni del Cheese. It's here in the police station we learn that a pimp put his mother in a clothe dryer and then threw her out a window. What relevance does this have on the story, nothing. So long story short Mackaroni is assigned a case and begin to investigate an incident where five guys (according to the movie) "pricks" were eaten off. The weird part is despite this incident people still go to hotel "Quicky". It's here where we learn Mackaroni is gay. That's right we have an unconventional gay protagonist in a horror film. Also some homoeroticism while nothing too explicit there is some nudity, though nothing from the front. So Mackaroni begins to "investigate" a man in his room and we find out a needless detail about his 32 centimeter...you know. This is where Mackaroni then first encounters a killer condom that bites one of his balls off completely. Mackaroni soon becomes the laughing stock of his police force as no one believes him there's condoms on the loose. He begins his quest to get rid of these killer condom no matter how hard it'll be. This might come as shock, but this trashy horror film actually does develop its main characters. A bit unexpected for a horror movie since characters are just chow for the killer and don't go beyond their stereotypes. One day, when Mackaroni is on stakeout to find evidence to prove to everyone there is killer condoms. He gets a hunch of a suspicious looking condom interrupting a couple and presume to shoot the condom in slow motion. He soon discover he shot a regular condom. Moments later he finds a real killer condom slivering off with someone "prick". Makoroni unable to cope with the lost of a condom goes home to take shower where he kills a condom by blowing it up with gas. The next scene is weird for it actually explains things on the creature. According to the scientist it's "Made of human epithelial cells underlaid with peritrophic membranes". Which is a needlessly complicated way of simply saying it protects against pathogen and can improve digestion track. We soon find out these creatures are man made. Apparently a cross between a giant worm, a jellyfish and a piranha. Oddly enough this is not the weirdest thing in the movie. The scene after serves little purpose as Markoroni gets serious with his "investigation" in a elevator causing it to break. Somehow it get politics involved as the president's monument is eaten off. There a couple more scene, something about Larry King being involved, but nothing too important to the main plot. The investigation soon leads to a church where we find out it has a secret underground lair. There Makoroni finds the scientist making these killer condoms because the church give him red jello. So why would a church kidnap a scientist to make an army of killer condoms? So they could do away with all the bad people of the world. Which is not that bad of an idea. I mean who seriously would believe anyone who said "It was the killer condoms". Sure it's flawed in the fact the villain could kill innocent people she wasn't aiming towards, but not half bad of an idea. Though more bizarre is a movie about killer condom would have a sermon about accepting everyone for who they are. Wait...I saw a horror movie about killer condoms and it has a good message unlike a majority of the films in the genre. Now that is odd. Killer Condom: The Rubber That Rubs You Out was clearly never meant to be a masterpiece let alone a great film based on its premise. It is self aware and in the joke never taking itself too seriously. It has limited appeal in the form it has low brow humor (kinda like my review), the homoeroticism might turn off some, and cheesy romantic moments. This is best watched with group of friends if you want something to make fun off or a plain cheesy movie for a good laugh or too.

it's a good idea, but not well expressed. Quite entertaining however, Ggotta love the Germans

It was a Crack idea, but in a twisted kind of way a funny movie.

Kondom des Grauens (Killer Condom) is a unique and funny movie.In a modern world where movies are just copies of past hits, it's great to see something original.Killer Condom shows people that safe sex can still be dangerous!

Killer Condom: The Rubber That Rubs You Out Quotes