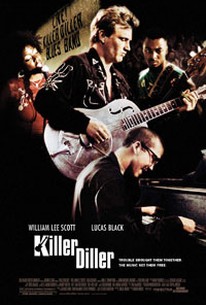 Arrested for violating his parole, guitar playing car thief Wesley Benfield (William Lee Scott, The Butterfly Effect, Identity) is sentenced to a halfway house in the middle of the Bible belt. Ned Sears (Fred Willard), who runs the house, is an eccentric zealot currently forming his own hymn playing band and recruits young felons based on their musical talents. Wesley and the motley assembly of lawbreakers are confined and condemned to playing "church music" to retirees and grade schoolers. Then Wesley meets Vernon (Lucas Black, Sling Blade, All the Pretty Horses, Cold Mountain), an autistic savant whose rocking blues piano playing electrifies them all. Vernon provides the band with the spark it needs, and together, with singer Shanita Scott (Niki Crawford), they form the red hot Killer Diller Blues Band. Now all they have to do is break the law one more time. Killer Diller writer-director Tricia Brock returns to the Missouri riverbanks of her youth with this fierce and funny adaptation of Clyde Edgerton's highly praised novel of the same name. Blues legend Taj Mahal opens the film and the score features Grammy winner Keb Mo'. The film also stars Mary Kay Place, John Michael Higgins and W. Earl Brown.--© Official Site

Writer-director Tricia Brock springs a few pleasant surprises while tilling familiar ground in her promising debut feature about a guitar-playing car thief who transforms a spiritless gospel group into a kick-ass blues band.

I loved the music. It's a good film.

How rockin' can a band be when their leader is Fred Willard?

Folks looking for unchallenging, uninspired easy-to-swallow 90 minutes of entertainment may find it here. Personally, I'd rather put on the soundtrack to Blues Brothers 2000.

Predictable, but heart warming and makes you feel good inside. Stunning performance from both Scott and Black.

Very good movie!! Yet another one of those "quirky" movies that I got a kick out of. I like alot of movies that are based around music, but this one also had a very good cast and storyline.

The music is amazing. Funny and uplifting. Great cast who really played out their characters well. Lucas Black deserves something for his radiant performance. Loved the Plymouth!

A pretty silly send up of a group of young people who are apparently sentenced to an alternative to jail for their minor infractions. The real star of this however is the music. Some strong blues performances supposedly played by these delinquents kept this from being a total waste of time. The story itself seemed to lack focus. Was it supposed to be about Vernon (Lucas Black), an autistic young man, finding his place in the world and gaining his father's approval in the process? Was it about the conflict between two brothers, played by Fred Willard and John Michael Higgins over control of a small Baptist College? What was the deal with setting the story there, anyway? Or, was it supposed to be about a group of troubled teenagers finding redemption in coming together to play the Blues? Any of those various storylines could easily have served as the central theme, but by trying to develop all three, the film felt diluted and incomplete. We never really got a feel for what was driving any of these stories. It could be that this viewer demands too much from a comedy (this is no drama, despite the NF category definition) but I know it is possible to make a funny film that tells a good story as well. If not for the music, this just might have been unwatchable. Keb' Mo' only has a bit part and contributes no music to the film, while Taj Mahal only appears at the beginning and briefly at the end.