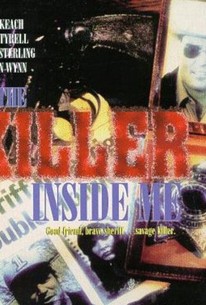 The Killer Inside Me Photos

Stacy Keach plays Lou Ford, a deputy sheriff whose brutal childhood experiences have left him emotionally warped. Ford is prized by his community for his no-mercy treatment of criminals. But the danger that he will snap and begin killing indiscriminately is ever-present. Based on the novel by Jim Thompson, in this adaptation Ford's psychotic breaks are signalled by lightning flashes. Director Burt Kennedy handles his material in the manner of his earlier Welcome to Hard Times: nothing is quite of this earth, and everything is painted in broad, violent morality-play strokes. Despite Kennedy's predilection for "cutting in the camera" (that is, filming each scene with only one or two different camera angles, so that his directorial vision will survive the editing room), Killer Inside Me gives evidence of having been severely tampered with in the post-production process.

Jack Moore
as Hank
View All

Critic Reviews for The Killer Inside Me

This again-atypical film from Winterbottom, the genre-swapping director of A Mighty Heart, Genova and The Road to Guantanamo, is a much more sober affair than its early, controversial press might suggest.

Not even the offices of the excellent Burt Kennedy can save this hopelessly stodgy and psychologising story.

Anti-ingenue Susan Tyrell's performance as the feckless hooker who inadvertently unleashes a hellhound on a small mining town is so rawly effective it's painful to watch.

The just-average script and some weak supporting roles, however, ultimately limit the film.

Audience Reviews for The Killer Inside Me

There are no featured audience reviews yet. Click the link below to see what others say about The Killer Inside Me!

The Killer Inside Me Quotes