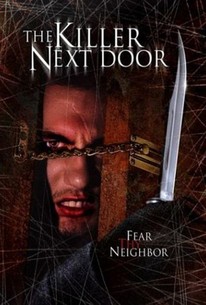 Directed by Chris Haifley, The Killer Next Door centers on Ronnie (Adam Scott), who has recently made his first, fledgling attempt at adulthood and moved out of his childhood house. Unfortunately, the move wasn't exactly a long-distance endeavor -- he lives in the guest house behind his aging mother's home, and visits her for smoking and television when he isn't busy working at a local halfway house. Things go awry when Ronnie attempts to seduce one of the rehabilitation center's residents, which coincides with his brother's release from a correctional facility. The film also features Mark Pellegrino, Aimee Graham, Brian Austin Green, and Matt Casado.

Critic Reviews for The Killer Next Door

There are no critic reviews yet for The Killer Next Door. Keep checking Rotten Tomatoes for updates!

Audience Reviews for The Killer Next Door

A low budget Indie film that I?d never previously heard of. Quite natural and realistic in parts, then quite amateur with camera shots etc in others. Touched on the Mental Health health Sector in quite a good way.

The Killer Next Door Quotes