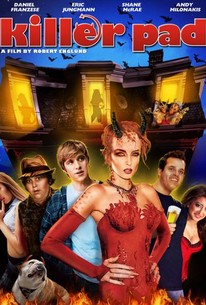 Eighteen years after making his feature directorial debut with the satanic telephone shocker 976-Evil, screen legend Robert England steps back behind the camera to call the shots for this story of a Hollywood Hills home with a particularly dark past. When three best friends score a big insurance claim, they decide that it's time to purchase their own place and finally fly away from the nest. Though rumors persist that they may be getting more than they bargained for, youthful enthusiasm wins out over good judgment and their initial excitement soon gives way to inescapable terror. Daniel Franzese, Eric Jungman, and Shane McRae star in a film featuring Joey Lawrence, Andy Milonakis, and Lin Shaye.

Edward Carnevale
as Joe
View All

There are no critic reviews yet for Killer Pad. Keep checking Rotten Tomatoes for updates!

Dislike. They try to make it funny, but instead just make it stupid. Could've gone better.