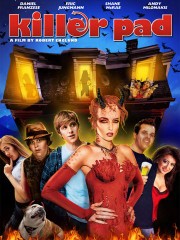 Three sex starved young men head to Hollywood in hopes of finding a fountain of females. Unfortunately, they find a real-estate agent that gives them an offer they can't refuse, a great deal on a house in Hollywood Hills. They celebrate the acquisition by throwing a house party. The house, which is possessed by the devil, is more than happy to host such a party.

"What am I talking about? You have a penis!
"Details!"

Robert Englund, director of 976-Evil and episodes from the television series Nightmare on Elm Street, delivers Killer Pad. The storyline for this is tragically bad, pathetic, and not scary and not funny. The action is ridiculous and whether serious or satire, there wasn't anything worth following here. The acting is painfully bad and the cast includes Daniel Franzese, Eric Jungmann, Shane Mcrae, Emily Baldoni, Corri English, and Jeff Bryan Davis.

"Stop staring at me, turd!"

I randomly came across this on HBOGO and decided to give it a shot. I shouldn't have. There is nothing going for this horror American Pie picture. This concept was pathetic and disappointing and I recommend skipping this...even if you're a fan of the horror genre.

"Joey Lawrence came to our party!"

John W
½ September 20, 2012
Robert Englund directs, but that doesn't come close to saving this wretched movie. I guess it was supposed to be a spoof comedy, but it's just not funny. The story, effects, and sight gags could have made a decent horror comedy, but it's all tease and no delivery. The three leads do the best they can, unfortunately, they were written with the obliviousness of Weekend at Bernies II. To sum up, the high point is a cameo by Joey Lawrence...

Adrian F
½ February 2, 2011
killer pad is a film i found on fear net. for those of you who do not know what fear net is, it is on demand and it shows some good scary movies but mostly cheesy, gory, over the top stupid movies. this film had no blood in it at all and i was disappointed. i knew that this wouldn't be oscar worthy, but the acting is just absolutely awful(one of the main characters is the gay guy from mean girls)and so is the unoriginal story line. the jokes they tell are so corny and you know when they say that a film is so bad that its good? well killer pad was just bad.

Christina E
½ October 27, 2010
Successfully executed what it set out to do. Granted, the story was a little lacking, but all in all, it was entertaining.

Adam A
October 15, 2010
Not really a bad film, all things considered. Ridiculous? Hell yeah. But there's a few laugh out loud moments in there.

Amanda K
October 11, 2010
Directed by Robert Englund = Had to watch it. Not too bad but I don't think it's something I'd watch again.

Kathleen D
½ October 7, 2010
This movie was directed by Robert Englund but was suprisingly more humorous than it was scary lol

Evan O
½ October 3, 2010
A very cheesy comedy horror (mostly comedy) that is entertaining, but could have been better. I had fun watching it though even though it isnt anything special

Peter P
½ September 15, 2010
Watched about half of this before an angel of mercy came out of no where and mercifully changed the channel.

Ifiok O
½ August 5, 2010
As far as horror-comedies go, you definitely should have this filed under the "fail" column, since it doesn't really succeed in producing much laughter or scares. With all due respect to the great Rober Englund, "Killer Pad" is a "killer" disappointment that doesn't deserve to be in your already impressive resume.