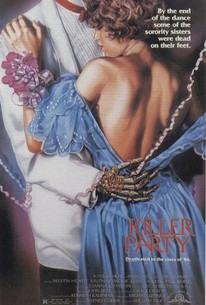 Once again, it's horror on a college campus. The difference between this and other entries in the slice-n-dice genre is that bloodflow is minimal and most of the horror occurs off-screen. That is not to say that there are no queasy acts of violence though. Set just before April Fools Day, the story centers on a trio of sorority pledges who attend a dance held at a haunted frat house where two decades before a pledge lost his head in a hazing gone awry. During the party, the dead frat boy rises up from his gravesite (located in the backyard), takes over the body of one of the girl pledges and embarks upon an evening of bloody, inventive revenge using a variety of tools that include but are not limited too garden utensils, electric wires and even a guillotine.

Ken Schnmidt
as Dancer
View All

There are no featured audience reviews yet. Click the link below to see what others say about Killer Party!