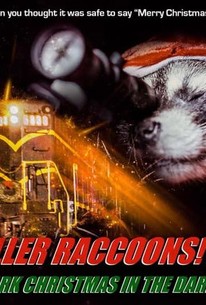 Yang Miller, Ron Lynch, and Tom Lyons star in writer-director Travis Irvine's anthropomorphic action-comedy, which is a sequel to 2005's Coons! Night of the Bandits of the Night. Pandemonium unfolds on an express train to Washington D.C. on Christmas Eve when it is hijacked by a gang of local terrorists and a group of government-trained raccoons. A college student who has just been released from prison takes on the terrorists and foils a military laser satellite system.

Tom Lyons
as The Secretary of Defense

James Adomian
as The President

Critic Reviews for Killer Raccoons 2: Dark Christmas in the Dark

There are no critic reviews yet for Killer Raccoons 2: Dark Christmas in the Dark. Keep checking Rotten Tomatoes for updates!

There are no featured reviews for Killer Raccoons 2: Dark Christmas in the Dark at this time.