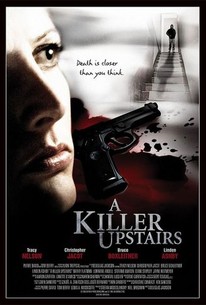 Mad at the world in general and his mom in particular, short-tempered twentysomething Michael Nowlin (Christopher Jacot) defiantly enters into a love affair with the 32-year-old wife of a wealthy businessman. When the woman is murdered, suspicion naturally falls upon Michael. In her efforts to prove his innocence, Michael's over-protective mother Sandra (Tracy Nelson) succeeds only in uncovering evidence that effectively indicts her son. But Sandra is not about to let anything get in the way of her belief that Michael has been wrongfully accused -- certainly not the man handling the case for the cops, Detective Bruning (Bruce Boxleitner). Filmed in Ottawa, the made-for-cable A Killer Upstairs first aired May 16, 2005, on the Lifetime channel.

Peter Michael Dillon
as Off. Boyle

Critic Reviews for A Killer Upstairs

There are no critic reviews yet for A Killer Upstairs. Keep checking Rotten Tomatoes for updates!

Audience Reviews for A Killer Upstairs

A little cheesy and overly-dramatic.