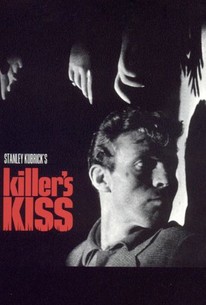 Stanley Kubrick's second film, Killer's Kiss was summed up by one influential critic as an experiment in esoterica. Filmed on a budget of $40,000 (raised by Kubrick's relatives), the 65-minute, black-and-white drama is a true "noir" film, shot mostly at night in a variety of seedy Manhattan locations. The plot concerns the efforts of boxer Jamie Smith (who also narrates the film) to rescue nightclub dancer Irene Kane from the lecherous maneuvers of club owner Frank Silvera. The much-admired climax finds Smith, Silvera, and the villain's henchmen pursuing each other in a warehouse filled with grotesque-looking store mannequins. Director-writer-photographer-editor Kubrick didn't like the happy ending imposed on the film by its distributor (United Artists), but it was a lot more logical and satisfying than the filmmaker's own planned denouement. The imperiled leading lady Irene Kane later became famous as TV commentator and journalist Chris Chase; also appearing in the film is Kubrick's then-wife Ruth Sobotka.

Jerry Jarret
as Albert the manager

Julius Adelman
as Owner of the Mannequin Factory

Ruth Sobotka
as Iris, a Dancer
View All

The young writer-director-photographer-editor of this un-promisingly titled film has a good deal of talent.

Kubrick's second feature shows his promise as a powerful and iconic director in motifs and style.

Kubrick's low-key lensing occasionally catches the flavor of the seamy side of Gotham life.

A noirish thriller with experimental trimmings that holds back most of the emotions, sensitive as well as otherwise, that threatened to make Kubrick's first feature mawkish.

Kubrick makes the most of flashback and dream sequences, and a surreal climactic fight in a warehouse full of mannequins.

Kubrick worked in an uncharacteristically naturalistic style despite the genre material, with mixed but still fascinating results.

As a low-budget film noir, its narrative seems flat to me, without intrigue, populated by stereotyped and empty characters that I forget in less than an hour of footage. [Full review in Spanish]

Though short and simple, the film is a fascinating exploration of man's infatuation with (or inability to escape from) violence.

...a must for Kubrick aficionados...

Faced with hardly any budget to speak of, the 26-year-old Kubrick pulled out every trick that an independent filmmaker of no means could ever hope to stumble upon.

Frankly, it's a pretty wretched story, but this small, cheap film has style to spare.

It's tense, compelling and steeped in an urban anxiety that's strangely contemporary.

Kubrick's second feature, and first noir, is a thrill to watch, if only to see the seeds of a budding legend be sown in front of your very eyes. Without exaggeration, Killer's Kiss features some of the best deep focus long shots I have ever seen, and the visual sophistication Kubrick employs (with a keen emphasis on motif, symbolism and mood lighting) demonstrates that even early on, he was worlds ahead of many of his colleagues in terms of directorial aptitude and his command of cinematic language. No one shot is the same, no one angle is replicated. Unfortunately, the scant running time inhibits any real chance at character development (or narrative development, for that matter) but that's okay -- there's more than enough to marvel at.

Vincent Rapallo: Like the man said, "Can happiness buy money?"  "Her Soft Mouth Was the Road to Sin-Smeared Violence!" I found Stanley Kubrick's second directorial effort, Killer's Kiss, to be a pretty solid film. I enjoyed watching this early work from Kubrick. It was good and you can see some of his techniques when it comes to camera work, but that's about the only thing that makes it seem like a Kubrick film. Obviously it was made on a small budget with a no name cast, who I thought was actually decent, and all in all it turned out to be a entertaining film. It's just crazy and cool to think about how Kubrick went from this little, low-budget, hour long romance thriller to films like 2001 and The Shining.  To the world of Kubrick fans, this is kind of considered his first true film, despite the fact that he made Fear and Desire. Kubrick, himself, hated that film and didn't even want people to see it.  There's cool little sequences in this movie, such as the final fight scene that basically mirrors the boxing match. There's a little hint of what is to come from Kubrick. His great foreshadowing was on display here in an early work. The music seems like it belongs anywhere else as long as that place isn't a Kubrick film. This is the only film from him where I didn't particularly care for the score. This movie is cool in that it shows the start of an immense talent. It shows a starting point for what would become one of the, if not the, greatest directors of all-time. It's cool to see that he always had an eye for cool shots and how to make a scene awesome visually even without a big budget, cool effects and huge set pieces. If you are a fan of Stanley Kubrick, you need to see this movie.

I was really taken aback by "Killer's Kiss;" Stanley Kubrick's ultra-independent second feature. This film is just so obscure, compelling and visceral. The cinematography, by Kubrick himself (he also edited, directed, wrote and produced) is stunning. The film has such an urgent time and place and New York City literally intrudes, seeps into, every frame. Because of this, the film has an energy and uncanny (sort of) cohesion. The film can be spare and abstract but it's fun to see Kubrick working in these perameters, or lack there of. "Killer's Kiss" is chock full is surreal, compelling imagery that stands alongside Jean-Luc Godard and even David Lynch at times.

This is a solid noir film with a brilliantly staged finale that is not only unique for its time but is tense throughout. It is nowhere near Kubrick's later masterpieces like A Clockwork Orange and 2001, but it is pretty solid for someone only making their second feature.