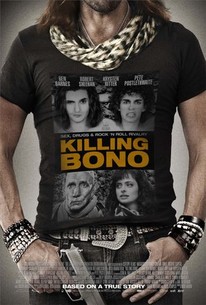 Killing Bono is a rock' n' roll comedy about two Irish brothers struggling to forge their path through the 1980's music scene, whilst the meteoric rise to fame of their old school pals U2 only serves to cast them deeper into the shadows. -- (C) Arc

While Barnes and Sheehan are persuasive as the squabbling siblings, the music-biz mockery is blunt and obvious.

A charming admixture of "Goodfellas" and "Almost Famous," "Killing Bono" is a fanciful rock tale that is nevertheless based on a true story.

A shapeless rock-music caper that, like its deluded antihero, just doesn't know when to stop.

Hamm's movie is sparky and fun, and full of affectionate pokes at the '80s music scene. It's also, in terms of music biopics, probably better than the real thing.

Neil's not a very likable protagonist - he's actually often awful - but who can't relate to that nagging certainty that one's destined for great things?

Despite having plenty of guns, drugs and danger,[Killing Bono] isn't really all that dark.

the story of what would charitably be called a wackadoo

Don't expect any factual expose about the formative years of U2; this is more of a rock farce in which the band is sort of a plot device.

It's certainly lightweight, but there's nothing at all wrong with that. I thoroughly enjoyed it.

Killing Bono's rise-and-fall arc is a little predictable, but the cast is spirited and U2 fans should get a kick out of the references to the band's early days.

Like an overlong guitar solo, the film sags badly in the middle as mouthy Neil sabotages his own career again and again, but co-writers Dick Clement and Ian La Frenais provide plenty of gags and the performances are full of vim.

It all starts so innocently in Dublin when Ivan(Robert Sheehan) auditions for a band that Paul(Martin McCann) is putting together. Paul wants him as rhythm guitarist for his band, The Hype, but Ivan's brother Neil(Ben Barnes) intervenes without his brother's knowledge to keep him out of their band and in his, The Undertakers, who end up opening up for The Hype, just before it is renamed U2. Years later, Neil is a music journalist while The Undertakers are having trouble finding a venue to even perform in, eventually settling on an illegal strip joint where they cut a deal with Machin(Stanley Townsend), so they can move to London to pursue their dreams. Enter Gloria(Krysten Ritter). Well, if there was a fifth Beatle, then why could not there have almost been a fifth member of U2? It is a question the tragicomedy "Killing Bono," based on a true story, answers in its own engagingly offbeat way, aided by Pete Postlethwaite who is a blast in his final screen appearance and Stanley Townsend in a neat turn. And that's not to mention the usual bug-eyed charm of Robert Sheehan. In general, "Killing Bono" does a fine job of exploring what it takes to succeed in the music business. When we first see U2, there is no doubt they are going places, although maybe not as world conquerors, yet. And then there is Neil, as the movie points out, who is plagued by chronic guilt, bad decisions and even worse timing on an almost divine scale, being simultaneously overshadowed by and doomed to trying to compete with somebody who is just so gosh darn nice.

I really enjoyed this film. I had so much fun watching this movie, and I personally found it fantastic. I have not read the book, but I loved what was done in this story. I am assuming that it did not follow the book very well by some of the fan reviews that I have read. The movie in itself was so enjoyable, that I don't really care that it took poetic license (as movie makers will do). I am interested, however, in reading this book now...

The premise of "Killing Bono" -- that teen classmates of U2 would simultaneously form their own band and struggle for recognition while jealously watching Bono and company conquer the world -- should be irresistible to rock-music lovers. That it's based on a true story adds even more allure. Unfortunately, the facts were obviously embellished to create a more entertaining screenplay -- the self-destructive choices of the rival band's singer (who also wrote the book that inspired the film) are so wildly stupid that credibility is shot. I mean, really -- what member of an unsigned club band would turn down a chance to open for U2? As for depictions of U2 itself, most fans will be disappointed. None of the group's real members appear. Just one U2 song ("I Still Haven't Found What I'm Looking For") is on the soundtrack. The simulated group is barely shown performing, and only the "Bono" actor has a substantial part. He is a poor physical match. Sadly, the film's most memorable performance comes from the late Pete Postlethwaite as a homosexual landlord and mentor. It was his final role.

Very funny movie about Neil McCormick and his brother Ivan who want to be rock stars. But they are over shadowed by their school friend Paul aka Bono. This movie looks at the journey of the two brothers to rock bottom while U2 raise to stardom. Stars Ben Barnes. I was also an extra in the movie so it was very exciting to be a part of it and to watch it.