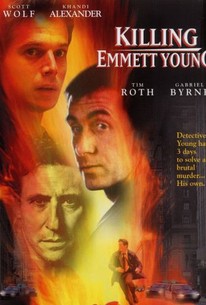 Issues of identity, mortality, and inner peace are all at play in this psychological thriller about a young detective's last days on earth. Former Party of Five housemate Scott Wolf plays Emmett Young, a detective whose ambition and drive are thrown up in the air when he learns that he has contracted a terminal illness, a discovery that coincides with his new assignment to the homicide division. As Young grapples with his impending death, a mysterious stranger by the name of Marlowe (Gabriel Byrne) appears and makes the detective an offer he's not sure he can refuse: Marlowe will have Young killed at a random time and place, saving him the agony of a slow and lingering death by disease. Young agrees, and consequently throws himself into solving the homicide case he has been assigned. Convinced that he will find fulfillment if he solves the case before his death, Young is forced to question himself when John (Tim Roth), a taciturn security guard, takes a strange interest in him, and the dying detective realizes his last days will be anything but peaceful. The feature debut of director Keith Snyder, Emmett's Mark had its world premiere at the 2002 Philadelphia Festival of World Cinema.

There are no critic reviews yet for Killing Emmett Young. Keep checking Rotten Tomatoes for updates!

There are no featured audience reviews yet. Click the link below to see what others say about Killing Emmett Young!