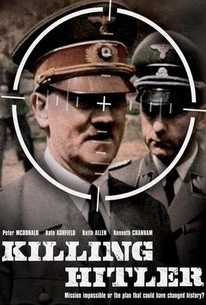 Historical fact melds with cinematic fiction in this political thriller detailing British plans to assassinate Adolph Hitler during the height of the Nazi leader's horrific reign. Dubbed Operation Foxley, the highly classified plan was hatched by British operatives in June of 1944. The British knew that Hitler was most vulnerable at his Berghof estate in the Bavarian Alps, and drew up a variety of methods for carrying out the assassination. But could such a bold plan have any real hope of succeeding? By placing the viewer right alongside the British agents who were willing to lay their lives on the line in order to defeat Nazi Germany, director Jeremy Lovering allows us to consider how history may have been affected had Operation Foxley succeeded. ~ Jason Buchanan, Rovi

There are no critic reviews yet for Killing Hitler. Keep checking Rotten Tomatoes for updates!

There are no featured reviews for Killing Hitler at this time.