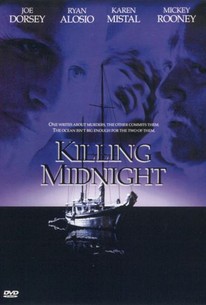 A mystery writer's life is turned upside down when a series of killings start to mimic the plot of his first novel. Trouble starts when a neighbor of novelist William Rhodes (Ryan Alosio) is found dead near his boat in the same fashion as a murder described in Rhodes' book "Killing Midnight." Soon the suspicion is turned on the writer, whose prose has seemingly come true. In a fit of writer's block, William travels to see his literary agent in order to put the investigation behind him and find inspiration for his next novel. Little does he know that the killer has followed and no one is safe until he has been stopped.

There are no critic reviews yet for Killing Midnight. Keep checking Rotten Tomatoes for updates!

There are no featured reviews for Killing Midnight at this time.