The Killing of a Chinese Bookie1976 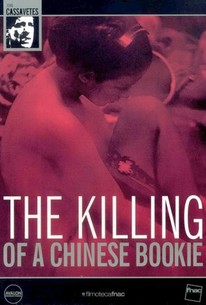 Critics Consensus: Ben Gazzarra gives a grand performance as a hard-pressed debtor with delusions of grandeur in this naturalistic and tense thriller.

Critics Consensus: Ben Gazzarra gives a grand performance as a hard-pressed debtor with delusions of grandeur in this naturalistic and tense thriller.

Critic Consensus: Ben Gazzarra gives a grand performance as a hard-pressed debtor with delusions of grandeur in this naturalistic and tense thriller.

The Killing of a Chinese Bookie Photos

John Cassavetes takes a contemporary film noir turn (which he would return to in Gloria) after exploring domestic melodrama in A Woman Under the Influence with The Killing of a Chinese Bookie. Ben Gazzara plays Cosmo Vitelli, the owner of a sleazy Los Angeles strip joint, who loses $20,000 at a mob gambling club owned by a small time gangster (Seymour Cassel). Since Cosmo doesn't have the $20,000, he is forced to murder a Chinese bookie in order to clear his debt to the mob. What Cosmo doesn't know is he's part of a set-up. The bookie is actually a West Coast mob boss protected around the clock by bodyguards. The mobsters figure that Cosmo will be killed in an impossible hit and they can take over his nightclub. But Cosmo proves luckier than the mobsters think -- he manages to kill his target, and now the mobsters have to track down Cosmo and kill him. Initially, at 133 minutes, the movie was subsequently re-edited by Cassavetes to 109 minutes. ~ Paul Brenner, Rovi

Morgan Woodward
as John the Boss

Virginia Carrington
as Betty the Mother

Hugo Soto
as The Chinese Bookie

Catherine Wong
as The Bookie's Girl

News & Interviews for The Killing of a Chinese Bookie

Now Streaming: X-Men: Days of Future Past, Far from the Madding Crowd, Silicon Valley and More

View All The Killing of a Chinese Bookie News

Critic Reviews for The Killing of a Chinese Bookie

The genre elements are mostly subterfuge because otherwise [Cassavetes would] basically be bleeding on the screen.

When Cassavetes is really cooking, even the moments that are awkward and forced can become electric.

With a heavily improvised script Cassavetes gets the most from his actors, each giving emotive performances.

John Cassavetes, who made much of his money performing in action films, put that experience to work as the director of this hard, brooding crime drama

There's no cinematography credit, which suggests Cassavetes either added that hat to his writer-director wardrobe, or the real culprit left town ahead of the posse.

It's rather like a shaggy dog story operating inside a chase movie. Chinese Bookie is the more insouciant, involuted and unfathomable of the two; the curdled charm of Gazzara's lopsided grin has never been more to the point.

It's a movie about a testy, outsider artist and his gang of misfit collaborators, the John Cassavetes biopic once removed.

Gazzara exudes cool and calm while also stinking of panic.

This was [John] Cassavetes' gift. As challenging as his films can be, he found humanity in gangsters and villains as well as in regular guys.

This was Cassavetes' attempt to make a film with more commercial elements, but the melding of a conventional narrative with his own abstract musings doesn't completely work.

Audience Reviews for The Killing of a Chinese Bookie

An offbeat but unique take on the noir genre keys that might seem to go nowhere most of the time and yet brings some freshness and bravado.

Gazzara is amazing. But the real star is Cassavete's direction. The way this film slowly transforms is amazing.

Cosmo Vitelli is the owner of a strip club on the sunset strip in Los Angeles, and his business is slow. He's an ex-New Yorker who's re-located to L.A. and is trying to be a big shot, only he doesn't seem to get much respect, but boy, there sure is an air of impending doom surrounding the guy. He goes to the casino of a fellow club owner and tries to be a bigshot in front of his girls, but winds up with a $23,000 debt to what is clearly a mob family. In order to forgive his debt, they want him to kill a chinese bookie they claim owes them money. All is not as it seems to be though, neither with the set-up nor Cosmo Vitelli himself. The film itself isn't directed in a very accessible way, there's lots of random close-ups and off camera dialogue, but it is engrossing (it seems to slightly imitate the Scorsese style, and not just because of the gangster element). Anyway, since when does art always have to be assessible? The soundtrack is near barren, almost the only time music is heard is when the characters on the screen are hearing it. All Cosmo wants to do is run his nightclub and it seems he'll do anything to keep things normal. Perhaps even something crazy as he may be crazier than he let's on. There's more to this low budget crime drama than suspected at first as well.

Gazzara in a tuxedo the whole time, I'll watch that any day of the fucking week.

The Killing of a Chinese Bookie Quotes