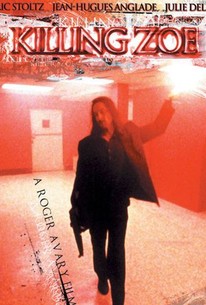 Critics Consensus: Senselessly violent and mean-spirited, Killing Zoe fails to deliver a much needed cleverness to back up its hyper-stylized flourishes.

Critics Consensus: Senselessly violent and mean-spirited, Killing Zoe fails to deliver a much needed cleverness to back up its hyper-stylized flourishes.

Critic Consensus: Senselessly violent and mean-spirited, Killing Zoe fails to deliver a much needed cleverness to back up its hyper-stylized flourishes.

This thriller follows the exploits of a recently released con who gets involved with the bank job from hell. As soon as Zed is released from prison he heads for Paris to perform a robbery for a friend. Zed is a safe-cracker. His friend Eric has chosen a very difficult safe at a large bank. Not only does he expect Zed to successfully break in, he wants him to do it during business hours. Eric "plans" that it will be as easy as walking in the bank, pulling out the cash, and leaving. Immediately after the heist, Zed must leave Europe. Before he meets with Eric, Zed spends time with Zoe, a call girl. The night before the job, the 9 thieves spend their time drinking, taking drugs, and making love. None of them are mentally and physically prepared for the theft. Sure enough, the robbery begins badly. Though there are seven members on the "team," most are so badly hung-over that they are not functioning. Someone is killed. Zed is taken to the basement to open the vault. En route he spies Zoe, who works as a teller by day. The plot offers many unique twists before the doomed thieves get their proper due.

George Hernandez (I)
as Stodgy Customer

It sweeps you up in Eric's Dionysian revelry and, like Zed, you'll be clambering for a shower afterwards.

An ultra-violent but vapid crime caper that owes as much to Tarantino as to film noir, both American and French.

An ugly, mean movie that represents the low point for Tarantino knockoffs -- and Tarantino actually produced it!

Clever'n a barrel of monkeys.

Roger Avery's completely subtle masterpiece of a bank heist epic. The story is incredibly well crafted and eccentric, without having any of Tarantino's stink all over it (which ruined Pulp Fiction for me). The filming style is quite original, but also homages classics like Dog Day Afternoon. The acting was extremely above average for a low budget, including one of Eric Stoltz's best performances.

A thoroughly entertaining and stylish B-movie heist caper, but the balance between pros and cons isn't quite equal enough to warrant a strong recommendation.

Directed by Roger Avery, Produced by Quentin Tarantino, amidst the height of the 90?s Cult drug fuelled storylines, topped with violent criminals and a chaotic bank robbery. Some pretty good camera shot interpretations and probably the role Eric Stoltz is best known for (apart from his smaller role in Pulp Fiction that is). Certainly not flawless and perhaps the one that has dated more than some of the other within this genre and era, but one woth watching.

Pretty fun bank-robbery-gone-wrong film. Nothing new to the genera, but very entertaining. The main villian Eric was a pretty terrible person, which makes for a great antagonist. Moral of the story?: Be nice to prostitutes, because they may save your life in a hostile situtation.