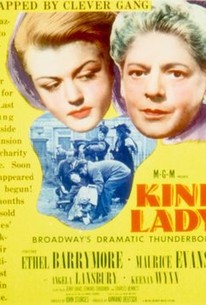 Though habitually unlucky in love, wealthy London recluse Mary Herries (Aline MacMahon) succumbs to the charms of handsome artist Henry Abbott (Basil Rathbone). She is persuaded to invite Abbott into her home, only to discover that he has a sinister ulterior motive. With the help of his disreputable associates, he intends to steal all of Mary's valuable art treasures, then do away with the poor woman when the job is done. Held prisoner in her own home, Mary is unable to summon the authorities, who've been persuaded by a crooked doctor that the old woman is insane. How long will it be before she can get word to the outside world? Kind Lady is adapted from Edward Chodorov's theatrical version of the Hugh Walpole novel Silver Mask, with Walpole's original bleak ending bypassed in favor of Chodorov's more optimistic denouement. To avoid confusion with MGM's 1951 remake, the 1936 version of Kind Lady was retitled House of Menace for television.

Frank Reicher
as Roubet
View All

I didn't find it entertaining, just unpleasant and absurd.

There are no featured audience reviews yet. Click the link below to see what others say about Kind Lady!