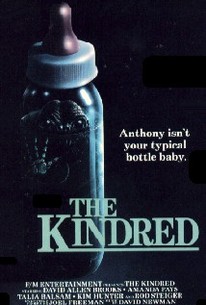 A superior follow-up to The Dorm that Dripped Blood from directors Jeffrey Obrow and Stephen W. Carpenter, this campy, slime-covered monster movie centers around a dark secret kept in the basement catacombs of an ailing geneticist (Kim Hunter), which turns out to be the bizarre end product of a gene-splicing experiment combining genetic material from her son with the DNA of an aquatic creature. The little guy -- dubbed "Anthony" by its creator -- breaks free to stalk Hunter's son John (David Allen Brooks) and his obnoxious friends before facing off with another loony scientist (Rod Steiger, in an absolutely hideous hairpiece). Filled with creepy surprises, audacious makeup effects and buckets of goo, this film's high point is provided by lovely Amanda Pays as Steiger's assistant, who proves late in the film why she kisses like a fish.

Critic Reviews for The Kindred

A disjointed, jigsaw-puzzle movie that is constantly announcing its borrowed characters and subplots and special effects.

It's a minor movie with no large ambitions. It belongs to the category of movies that can entertain or not depending on an individual's inclinations. [Full Review in Spanish]

Audience Reviews for The Kindred

There are no featured audience reviews yet. Click the link below to see what others say about The Kindred!