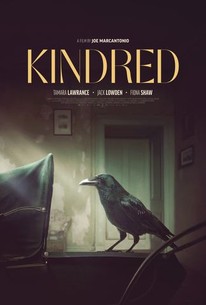 When her boyfriend Ben suddenly dies in an accident, mother-to-be Charlotte collapses upon receiving the news. She wakes up in Ben's family home, a crumbling old manor house in the middle of nowhere with Ben's overbearing mother, Margaret, and his controlling stepbrother, Thomas. They are determined to care for her, at least until the baby arrives. Grief stricken and increasingly haunted by visions possibly brought on by the pregnancy, Charlotte accepts their help. But as the days go by she begins to doubt their intentions and her suspicions grow. Are they drugging her and keeping her captive, with the aim of taking her unborn baby? As her visions intensify and the haze of lies grows, Charlotte decides that her only option is to break free from this family once and for all -- but at what cost?

Indie Fresh List: Kindred, Ammonite, The Dark and the Wicked, and More

It's Shaw who steals the show, conveying her character as both a heartless monster and a woman haunted by her own past, with that kind of breathy, distracted haughtiness she does so well.

This could have been the British Get Out, or at least a brutal dissection of class politics with added jump scares. Yet the novice director and co-writer Joe Marcantonio never moves beyond suggested ideas and themes...

By turning its heroine's confinement into a literal ordeal, Kindred grips best as a neo-Victorian nightmare of maternity.

Kindred is a ragged cry of rebellion, calling out to the flock to join forces against the darkness

Its co-writer/director has pulled off a rare feat: He's created a work that interrogates grief with a sociopolitical undercurrent without losing sight of the fact that this is a horror film in the first place.

Never played too broadly, the screenplay questions the sanity of all involved. It gets under your skin, even if it's hardly original.

Kindred was terrifying to watch because it was marked not by force or physical violence but continued and unending gaslighting.

The feature debut of writer/director Joe Marcantonio (co-written with Jason McColgan) is an engaging (and enraging) psychological horror that places him firmly on the map.

Kindred ... uses its horror tropes to touch upon noteworthy subjects. Disastrously, though, this is quickly abandoned in favour of quick thrills that generate little payoff.

Kindred is essentially the equivalent of those second cousins you are forced to see at the holidays: you truly want to care ... but you just can't muster the energy

A simple premise is delivered with a good deal of confidence and craftsmanship. And creepiness.

Despite its tendency to tiptoe around some of the truly dark elements of the story, Kindred is an unsettling slow-burn featuring two powerhouse performances from Tamara Lawrance and Fiona Shaw.

There are no featured reviews for Kindred at this time.