King Arthur: Legend Of The Sword2017 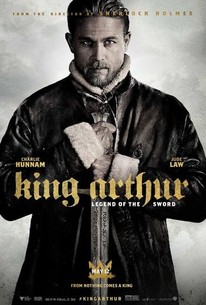 Critics Consensus: King Arthur: Legend of the Sword piles mounds of modern action flash on an age-old tale -- and wipes out much of what made it a classic story in the first place.

Critics Consensus: King Arthur: Legend of the Sword piles mounds of modern action flash on an age-old tale -- and wipes out much of what made it a classic story in the first place.

Critic Consensus: King Arthur: Legend of the Sword piles mounds of modern action flash on an age-old tale -- and wipes out much of what made it a classic story in the first place.

Acclaimed filmmaker Guy Ritchie brings his dynamic style to the epic fantasy action adventure "King Arthur: Legend of the Sword." Starring Charlie Hunnam in the title role, the film is an iconoclastic take on the classic Excalibur myth, tracing Arthur's journey from the streets to the throne. When the child Arthur's father is murdered, Vortigern (Jude Law), Arthur's uncle, seizes the crown. Robbed of his birthright and with no idea who he truly is, Arthur comes up the hard way in the back alleys of the city. But once he pulls the sword from the stone, his life is turned upside down and he is forced to acknowledge his true legacy...whether he likes it or not.

Astrid Bergès-Frisbey
as The Mage

News & Interviews for King Arthur: Legend Of The Sword

Upcoming TV Fantasy Series That Could Be the Next Game of Thrones
How Family-Friendly Are The Glass Castle and The Nut Job 2?
On DVD This Week: King Arthur: Legend of the Sword, Snatched, and More

View All King Arthur: Legend Of The Sword News

Critic Reviews for King Arthur: Legend Of The Sword

Ritchie is retelling an iconic piece of British literature in his own dizzyingly charged-up style, using all that excess energy to shake the source material off its foundations.

If you can bear the bad patches, there's something dazzlingly fun at the heart of it all.

Ritchie has reached into the medieval quiver of tales for material, but has not imposed the meta-narrative of Western history onto those stories. For this restraint medievalists should be thankful, and the critics should be a little more forgiving.

That's one thing that Ritchie's Legend in the Sword shared with Excalibur-a vague idea that Britain is destined for transformation. In Legend of the Sword, unfortunately, that transformation is little more than a teaser.

A murky video game aesthetic and impatient, maniacally fast cutting do it no favours.

A good production with some eccentric style, but a mostly bland and unfocused fairy tale reappropriation.

To borrow from a far superior film about this king -- 1975's Monty Python and the Holy Grail, of course -- it would be easier to cut down the mightiest tree in the forest with a herring than to willingly watch another entry in this errant enterprise.

This is a fun and excellently camp fantasy carry-on, given added flash thanks to the stunning scenery of Wales's Snowdonia and the Scottish highlands. There's also plenty of computer wizardry...

The characters are generic and unsympathetic; the antagonists are evil solely because they're supposed to be; and random superpowers spoil the fun of hand-to-hand combat.

This is one of the duller and uglier blockbusters in recent Hollywood summer fare. Put that sword back where you found it Arthur, it's a bit blunt.

Audience Reviews for King Arthur: Legend Of The Sword

Let's be clear: this contains very few aspects of the actual Arthur legend. They probably should have just gone for a wacky original medieval fantasy film instead. That being said, I didn't expect Ritchie's style to work this well here. And he hasn't been this crazy since Snatch. Some montages are so breathless, fast and innovative as far as editing and soundtrack go, it's a pleasure. Sure, the plot follows the genre conventions more or less, and the finale is a bit heavy on CGI. On the other hand the assassination attempt sequence is fantastic and the portrayal of magic pretty cool. Hell, I had fun with this.

This story is well known because it's over told. Woe betide the one who dares to update the thing! Yes, this is not your daddy's King Arthur, and thank goodness. Ritchie raises this bad boy up from the grave and instills the sucker with sweet life, and makes it a bad boy all over again. Jude Law is mad impressive. Charlie Hunnam makes relatable the whole "I-don't-wanna-be-king-but-watch-out-if-I-do" dynamic. Just as good of a film as it's forebears, The Adventures of Robin Hood" and "Excalibur" and worthy of that prestigious canon. Time will prove this one out.

Guy Ritchie continues to make overstylized versions of classic stories, only this one is a tedious and derivative action movie that seems like a desperate display of virility - let's be honest, instead of a sword, it would have been more honest to just show Arthur wielding his penis.