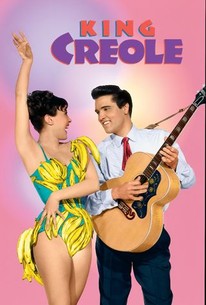 Elvis Presley delivers one of his finest early performances in King Creole. Elvis plays a teenager named Danny Fisher, who is forced to drop out of school to help support his ineffective father (Dean Jagger). Drawn to trouble like a magnet, Danny is saved from a jail term by New Orleans salloonkeeper Charlie Le Grand (Paul Stewart), who gives the boy a job as a singer. It isn't long, however, before local gang boss Maxie Fields (Walter Matthau), a shadowy figure from Danny's criminal past, puts the muscle on the boy, insisting that Danny sing at his establishment. To lure Danny to his side of the fence, Maxie relies upon the seductive charms of his gun moll Ronnie (Carolyn Jones), while Danny's true love Nellie (Dolores Hart) suffers on the sidelines. In addition to the expected musical numbers (which are cleverly integrated into the storyline), the film's highlight is a brief exchange of fisticuffs between Elvis and Walter Matthau. Together with Jailhouse Rock, King Creole is one of the best filmed examples of the untamed, pre-army Elvis Presley. The picture was adapted from Harold Robbins' novel A Stone for Danny Fisher. ~ Hal Erickson, Rovi

Hazel Boyne
as Woman Who Asks for Water

Elvis, young and relatively untamed, in a superior star vehicle from 1958.

This is the jewel in the King's crown.

Presley shows himself to be a surprisingly sympathetic and believable actor on occasion. He also does some very pleasant, soft and melodious, singing.

As the lad himself might say, cut my legs off and call me Shorty! Elvis Presley can act.

Curtiz's intelligent, austere, film noir-ish direction provides the perfect antidote to the occasional excesses of a script based on a Harold Robbins novel, and an ideal complement to Presley's performance.

One of the few Elvis movies that wasn't a "Let's make an Elvis movie" project, King Creole remains the king's personal favorite role -- one I'm inclined to agree with.

Presley was born to be a performer and his portrayal of Danny in King Creole added more credibility to his acting career.

As the mostextreme example of a contemporary idol, Mr. Presley is pretty fascinating, and though you may be put off at first by his pale. puffy, bruised-looking babyish face.

This is arguably Elvis Presley's best film, and certainly his best acting performance.

As directed by the versatile Michael Curtiz,this is one of the better Elvis musicals in the early phase of his screen career.

It does demand to be taken seriously.

King Creole was the first Elvis movie that I saw and I found out it was a good movie. Unlike many singers who try out their ability at acting, Elvis is actually a pretty good actor. Before watching King Creole, I never watched any of Elvis's movies because I thought that they would all be musicals and just be a bunch of people singing and acting crazy. But after watching King Creole I found out I was wrong. It was a good drama movie and now I understand why Elvis was in so many movies, not because he was a popular singer but he could also be a great actor. Walter Matthau and the rest of the supporting actors and actresses also did a good job. It's about how Elvis became a singer at a local club and gaining fame for his ability while trying to stay away from a group of punks who threatened him if he didn't cooperate. It's an all around great movie and I recommend it to anyone. Now I'll probably give a lot more Elvis movies a chance after seeing King Creole. NOTE: That was my Amazon review from the year 2000. It's still the only Elvis movie I've ever seen. I've never been a huge fan of his, I just like a few of his songs, but wouldn't mind seeing some more of his films.

Probably the closest you're going to get to a "proper" film starring Elvis. It has some semblance of plot, the B&W photography is nice and the songs do not seem quite so intrusive. It was obviously trying to cash in one the burgeoning "teen" bandwagon, but not bad.

My favorite Elvis movie. Kind of a James Dean story but Matthau is fun to watch.