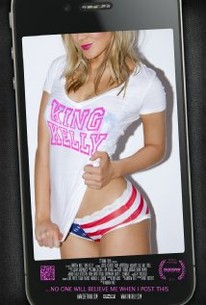 King Kelly is an aspiring internet star who performs webcam stripteases. When Kelly's car - filled with illegal narcotics that she must deliver - is stolen by her bitter ex-boyfriend on the 4th of July, Kelly and her best friend Jordan embark on an epic whirlwind of drugs, sex, violence and mischief-making as Kelly tries to reclaim what's hers. Kelly's biggest online fan, a wayward State Trooper, joins the journey as the night spirals into chaos. Made entirely from camera-phone footage, King Kelly is a sensational journey through hedonistic American youth culture and the YouTube generation.

Will Brill
as Ryan

Emily Fleischer
as Girl at Fire

Orien Longo
as Guy on Stairs

Dion Sapp
as Man on Street #1

Ian Eaton
as Man on Street #2
View All

It's an unflinching update to media scholar Neil Postman's prophetic claim about the deadly impact of television on cultural identity: Smartphones in hand, we face the danger of filming ourselves to death.

If social satire that elicits scornful laughter is your kind of humor, "King Kelly" will have you doubled over with guilty guffaws.

Cynical sexploitation neither thrills nor entertains.

King Kelly is a broad indictment of the emptier side of self-documentation and a more nuanced one of the Internet as a source of affirmation.

The film decides very early on, as part of its premise, to reduce Louisa Krause's King Kelly to a one-dimensional narcissist.

Neel has hit upon a compelling reason for the found-footage gimmick: to indict a narcissistic generation who think their phones make them royalty.

One of the cleverest, funniest and most appallingly true films of the year.

King Kelly is a film worth seeking out for fans who like social commentary mixed intelligently with entertainment.

There are no featured audience reviews yet. Click the link below to see what others say about King Kelly!