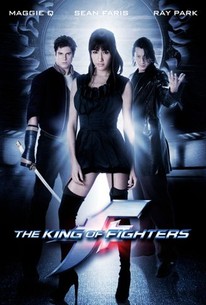 Will Yun Lee
as Iori Yagami

Critic Reviews for King of Fighters

Bares so little resemblance to the games you have to wonder why they even bothered. It's simple, not really effective, but the end fight is good for a laugh at least...

...nobody can be satisfied by a half-assed product; much less the fans. [Full Review in Spanish]

Yet another semi-classic video game from the nineties is butchered in to yet another lazily made film...

Audience Reviews for King of Fighters

You can't expect this to be really closely based on the popular SNK fighter as we all know how these type of films fare and this is no different frankly. With a small selection of characters from the game and an overly convoluted plot this film feels way too bogged down with mindless dialog and not much fighting. Game franchises like this tend to have rather silly overblown stories behind their characters which tend not to make much sense or have any proper continuity, I give you 'Street Fighter'. This film is a let down as the creators have tried to encompass as much back story as possible but all that ends up doing is boring and confusing you with endless Japanese sounding names, places and objects which mean nothing unless you are a fanboy. The fighting is pretty limp really and that's the killer blow, Ray Park growls and snarls his way through the film as the main bad guy and to be honest he looks the part..but that's it. The rest of the cast are nobodies accept for the overrated Maggie Q and there isn't really anything of interest to comment on. Unoriginal fights, dull costumes, uninspired effects (what little there was) and some bad looking sets all make this a poor waste of your time. Its not horrific as was 'Street Fighter', much better than 'Double Dragon' (not hard) but nowhere near as fun as 'MK' and even 'Tekken' had some reasonably fun fights with the pretty boy cheese meister Luke Goss. Main problem here is they tried to make it way too seriously and it just doesn't work basically.

"Wow, this just keeps getting better and better." The King of Fighters is more like the king of movies that have absolutely nothing to do with their source material. That's right, it even knocks Street Fighter: The Legend of Chun Li off its lofty perch, and almost reaches the heights of Super Mario Bros. You won't recognize any of the characters unless they mention their names, and even then you'll probably think you misheard them (prepare to choke on whatever you're eating or drinking when you're introduced to "Terry Bogard"). The story is incomprehensible, and even the characters freely and often admit that they have no idea what's going on. I wouldn't even know it was a King of Fighters movie if people didn't insist on saying "King of Fighters" as often and as awkwardly as possible.  Any and all entertainment to be derived from this will come purely from how outright hilarious it is in its awfulness. If there was any kind of script written down beyond drunken scribbles on a stained bar napkin, I'd be shocked. The dialogue is terrible, the actors don't even seem to understand what they're saying (I know I didn't), and the fight scenes are adequate at best, inexplicable much more often, and until the end, they're usually over in a few seconds either way.  On the positive side, the cinematography is occasionally good, there are frequent opportunities for laughs, and Maggie Q. is hot. Absolutely nothing like the character she's supposed to be portraying and so slender it looks like you'd blow her away by breathing on her too hard, but still hot. The chick playing Vice was pretty sexy, too. That's about it for the "pros" column.    If you can't appreciate massive levels of camp and unintentional humor, don't come near this. If you can, prepare to laugh and have a pretty great time mocking King of Fighters. It's so bad that it's wonderful.  Until the end, that is. The last part of the movie is a boring, seemingly endless fight that basically grinds the fun to a halt. It becomes pretty obvious around that time that most of the $12 million budget was spent on CG fireballs. And of course, the door is left open for a sequel. Because the filmmakers knew we'd all be demanding that.  This definitely is in no way, shape, form, or fashion a "good" movie, but it was a highly entertaining train-wreck...for a while. Fans of the games will be even more amused/horrified.

Gordan Chan screws up and creates a disaster of a movie in The King of Fighters.

The king of boredom is a better description for this movie or even the king of f******* bull****! The 90 minutes doesn't go by quick enough. The story unravels at a lackadaisical pace, and what doesn't help is the plot details aren't interesting or entertaining enough in the first place.

For a film titled The King of Fighters there isn't enough action and what does exist is unimpressive. The choreography has some small shining points, but nowhere near anything to recommend a viewing for. The CG effects are a mixed bag and once again they are nothing to feel bad about missing.

The cast sounds fitting for this type of film, but this is just a blemish on their resume. Maggie Q, Sean Faris, and Ray Park aren't good enough to step forward and take control of this picture. Francoise Yip is the only person that felt capable of getting the job done, but her serious lack of airtime was a hurting point.

This live-action film adapted on the video game is so dull as well as D.O.A.: Dead or Alive is the only excellent fight choreography and plenty of sexy and hot women. On a whole, the setting of the story manages to immediately rip-off The Matrix while sounding more confusing than the entire trilogy combined. The premise of this movie shows a secret tournament that is held in some alternate dimension in which fighters from around the world "log in" to via special earpieces. When some action does come once in a while, it is an utter let down and a complete joke especially when one knows what kind of awesome action Hong Kong is capable of. The fight choreography is generally uninspired, almost dull. Maggie Q does an excellent job of not looking embarrassed.