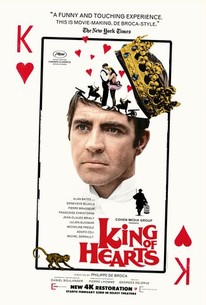 During World War I, Scottish soldier Private Plumpick (Academy Award (R) Nominee, Alan Bates) is sent on a mission to a village in the French countryside to disarm a bomb set by the retreating German army. Plumpick encounters a strange town occupied by the former residents of the local psychiatric hospital who escaped after the villagers deserted. Assuming roles like Bishop, Duke, barber and circus ringmaster, they warmly accept the visitor as their King of Hearts. With his reconnaissance and bomb-defusing mission looming, Plumpick starts to prefer the acceptance of the insane locals over the insanity of the war raging outside.

Jean-Claude Brialy
as The Duke

Françoise Christophe
as The Duchess

Michel Serrault
as The Crazy Barber

Critic Reviews for King of Hearts

An engaging and contrived oddity - like a U-certificate Marat/Sade - exoticised by the spectacle of non-English-speaking actors dubbed in order to play Scottish soldiers.

A surrealistic jewel of a comedy which you realize, when you can catch your breath between laughs, has made the case for the sanity of the lunatics and the madness of the war-waging sane.

It's the kind of comic allegory about war that depends on muddleheadedness in order to make much sense, but if you're feeling muddleheaded, you might find yourself charmed and enchanted by the conceit.

The most cloying of cult films.

Its appeal is easy to understand, even if its themes and characters err on the superficial side.

It is dully photographed, rather tritely directed, obviously conceived, and encumbered with a leaden plot which it fails to fully exploit.

It's a delightful tale of rank stupidity and realising what is important in life.

Its Fellini-esque images and satirical plot are never dull, but their 1960s wackiness now seems gratingly forced, as does the film's faith in the idea that insanity is merely free-spiritedness.

De Broca delivers potent satire in a manner both skilful and charming.

De Broca's anti-war parable about who's sane and who's mad is not very deep but it's innocently charming. It was extremely popular when released in 1966, becoming a cult movie in campuses.

Rich Cline
Shadows on the Wall
View All Critic Reviews (18)

Audience Reviews for King of Hearts

"In a mad world only the mad are sane." -Akira Kurosawa

When the populace of a small French town during WWI evacuates because of a bomb threat from the Germans, Pvt. Charles Plumpick (Alan Bates) is sent in to diffuse the bomb. What he doesn't know -- but we do -- is that the people he encounters in the town are all lunatic asylum escapees. In a lot of ways, the patients seem more sane than the officers and soliders involved in the war....they are definitely happier. The lesson of this film might be "Ignorance is bliss," or maybe "Sanity isn't all it's cracked up to be."

not for all tastes but if you're game its enjoyable

A soldier is sent into a town of crazy people during the war and finds that maybe the crazy ones are the people outside the town.