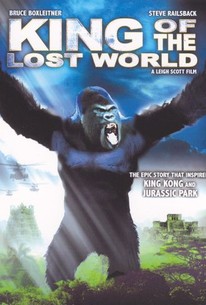 King of the Lost World Photos

Steve Railsback and Bruce Boxleitner headline this modern take on Robert Louis Stevenson's classic /fantasy adventure about a mysterious undiscovered world where creatures beyond out wildest imagination roam free. A commercial airliner has crashed deep in the heart of the Amazon, and as the survivors attempt to make their way to safety they make a most terrifying discovery. This is a land out of time, a place where towering scorpions, winged reptiles, and a ten-story tall simian engage in a constant battle for supremacy. Mankind is but a savory snack in this violent world of giants, and if the survivors don't find their way out of the jungle fast they will no doubt meet a fate worse than death.

Angela Horvath
as Chrissy
View All

Critic Reviews for King of the Lost World

In the end, King of the Lost World is a weak story desperately seeking some depth or at least bring more of the monster element into the final cut.

If you have never heard of KING OF THE LOST WORLD, you're lucky - or at least you were, until you started reading this review.

Audience Reviews for King of the Lost World

There are no featured audience reviews yet. Click the link below to see what others say about King of the Lost World!

King of the Lost World Quotes