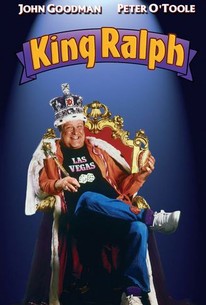 John Goodman stars as the title character, an American slob who ascends to the British throne after all of the other descendants are killed in a freak accident.

Tim Seely
as King of England

As the years pass, King Ralph increasingly looks like an old-fashioned minor entry in the culture clash comedy catalog.

Filmmaker David S. Ward certainly does an effective job of establishing Goodman's affable protagonist and the situation in which he finds himself...

Back in the early 90's we got many family movies that offered lots of cheesy irritating laughs and child actors, the odd thing was many actually did really well. The original movie would somehow manage to become a reasonable hit (a different time), and those movies, in some cases, actually turned into franchises! Those same franchises then managed to knock out a semi-decent sequel or two before eventually disintegrating into utter trash with numerous straight to DVD sequels being churned out. The films I refer to would be 'Beethoven', 'Problem Child', 'Home Alone' and 'Free Willy'...mainly. 'King Ralph' was a slightly different animal though, a stand alone family film that was totally stupid in concept but offered a really solid cast and, by the looks of things, some high production values. Amazingly its yet another novel adaptation albeit a loose one, the story simply revolves around the British Royal Family getting wiped out in a freak accident. Its then down to the upper echelons to dig out a new King by rooting through the vast Royal Family tree, trying to discover a long lost distant relation with true royal blood to take the throne. Once they do it of course turns out to be the most unsuitable person imaginable (well for the early 90's anyway), a fat, loud, uncouth, brash American. Right so who would be the best fat loud American of the time? why John Goodman of course. The fat, beer-swilling, checkered-shirt wearing slob from the hit TV US show 'Roseanne'. Basically take Goodman's popular character from that show, the stereotypical, overweight, middle aged, lacking of general knowledge, US sports obsessed male Yank, and make him a lounge singer with a knowledge of female club stripping and a penchant for Elvis style shades (not much of a stretch). To counter this you need a stereotypical British gent to guide and teach this gaudy foreigner, enter the stellar Peter O'Toole as the Royal secretary. You can't really get any better than O'Toole for the epitome of a British aristocrat (despite being possibly Irish), and you can't really get anymore of a polar opposite to Goodman. The duo play off each other superbly well considering how daft the film is and the fact its pretty much aimed at children. O'Toole puts in a sterling performance coming across perfectly as someone who would look after royalty, sure we've seen this type of performance from him before but his loyal butler-esque manner is so pleasing to watch and listen to. Indeed his speech to Goodman's character about what it is to be a King of England is quite stirring I must say, as a Brit it did bring a lump to my throat, such a shame these days patriotic talk like that is non-existent and almost frowned upon. To add even more British star power to the proceedings we have John Hurt in an even more outrageously, hideously over the top, aristocratic, Conservative cad who will stop at nothing to dirty the new Kings image. Hurt's slimy, arrogant, pompous voice and attitude is just as good as his weaselly yet smartly dressed appearance complete with a dastardly thin pencil tash. I love how he's also completely cold, emotionless and kinda racist, calling Goodman's character 'a song and dance man from the colonies', a real Alan B'Stard. What's more his sidekick is played by Leslie Phillips! all the old chivalrous warhorses here. So the brilliant character acting aside, what's also very impressive about this apparent silly kids flick is the fact it all looks fantastic. The outfits, suits and general attire of dignitaries and royals is spruce, debonair and dapper all round, everyone looks tip-top and pristine. The locations are a mix or real stately homes, clever use of small sections of real posh establishments and more obviously stock footage. Interior sequences are the most impressive with some sets looking exquisite, highly detailed and extremely lavish, it really looks like no expense was spared in creating these elegant royal interiors. I guess its all a bit surprising really, you'd never expect such extravagant detail with a silly little comedy like this, you'd think it would be all about the slapstick and raking in as much moolah as possible, different times. Being an old movie I did also enjoy the retro blast I got from time to time, anyone of my age will no doubt feel the same way. Its always amusing to see old fashioned British punks in these movies. You the know the types, brightly coloured mohawks, black leather jackets covered in badges, chains and safety pins, lots of makeup etc...Twas also funny to see them all watching old fashioned TV's in the windows of a Rumbelows store, remember that?? Yeah the whole thing is very predictable as a kind of rags to riches, Prince Charming type of affair, you can guess what's gonna go down in scenes and overall its all very sweet and adorable. It might sound cliched and dumb but watching the hapless Ralph trying to learn the ways of the super rich, whilst attempting to chat with senior dignitaries and royalty, is perfect light entertainment. That said there is a pleasant and fresh tale to be discovered here, being based on a novel it kinda reminded me of 'Brewster's Millions' actually. Goodman (in an early-ish, pre-superstardom movie role) is amazingly likable as the American lounge lizard with a golden heart who is turned into a rich nobleman...with a golden heart. Supporting cast are all brilliant as said adding real quality and a hint of solid drama to the story, the film is fun for kids with plenty of cutesy charm, but it also has the odd snippet of fun for adults too.

[img]http://images.rottentomatoes.com/images/user/icons/icon13.gif[/img] In his first ever starring role, John Goodman really gives it his all and delivers a charming performance as the titiluar character that is the -should be hilarious- Ralph. The film surrounding Goodman isn't as energetic. There are very few laughs in the second half of King Ralph because it focuses more on the plot which in it's execution, should have been a lot funnier than it was. The whole idea of the film was designed primarily for John Goodman to do what he does best and wisecrack, do fat jokes and be lovable but their's very little of that as opposed to his role's in Dirty Deeds and The Big Lebowski. I laughed a few times but it doesn't make full use of the comedic cast it has on board. At best it's barely passable but also mildly amusing.