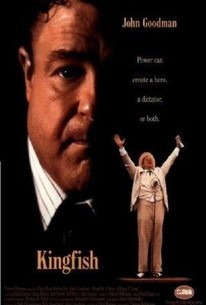 Originally made for cable television, this biographical drama chronicles the life of Huey P. Long (John Goodman), whose corrupt political machine dominated Louisiana for years. The movie opens with a 1930's newsreel giving a report on Long's plan to a run for U.S. President while depicting him as a demagogue in the tradition of Hitler and Mussolini. Shortly after the newsreel, Long is gunned down by an assassin, and the story is told in flashbacks as he reflects on his rise from humble beginnings, to Governor of Louisiana, and on to U.S. Senator. Long's power in his home state eventually bordered on dictatorship, but he received widespread support from the poor and disenfranchised because of his populist programs, such as providing free schoolbooks and building rural roads. The film also shows the private man behind the public persona, including a poignant scene at a relative's funeral where Long's father reproaches him for lying about his family to garner votes. Goodman was Emmy-nominated for his performance.

Jack Hazard
as Man at Parade

Mike McNally
as Man in Bathroom
View All

Critic Reviews for Kingfish: A Story of Huey P. Long

Huey Long continues to fascinate filmmakers, both of docus and features

There are no featured reviews for Kingfish: A Story of Huey P. Long at this time.