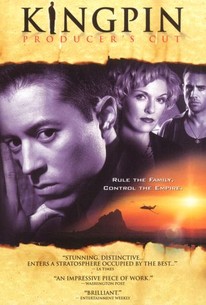 Widely touted as NBC's answer to The Sopranos, the six-episode series Kingpin also drew heavily from the British mini-series Traffik. The nominal protagonist in this seamy, violent tale of a Mexican drug-trading family was Yancey Arias as Miguel Cadena, the Stanford-educated heir apparent to the Cardena criminal dynasty. Together with his icy, coke-addicted wife, Marlene (Sheryl Lee), Miguel coolly guided the destinies of his worldwide family business, eliminating enemies, friends, and loved ones alike to maintain his empire. Others in the cast included Bobby Cannavale as Miguel's vicious "enforcer" brother, Chato; Ruben Carbajal as Miguel and Marlene's disillusioned eight-year-old son, Joey; Angela Alvarado Rosa as relentless DEA agent Delia Flores; Brian Benben as the Cardenas' personal plastic surgeon, Dr. Heywood Klein; and Shay Roundtree as Texas-born torpedo Junie Gatling, who acted as a sounding board for the other characters. Among the creative contributors to the series was Allen Coulter, who direct several episodes of The Sopranos. Originally slated for a March 2003 debut, Kingpin was moved up to February 2, 2003 to take advantage of a traditional network "sweeps week."

What Kingpin wants to be is the godfather stuck in Traffic.

There are no featured audience reviews yet. Click the link below to see what others say about Kingpin!