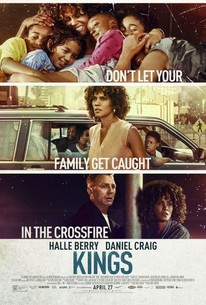 Critics Consensus: Kings has good intentions, a talented cast, and the basis for an incredible fact-based story; unfortunately, they don't amount to much more than a missed opportunity.

Critics Consensus: Kings has good intentions, a talented cast, and the basis for an incredible fact-based story; unfortunately, they don't amount to much more than a missed opportunity.

Critic Consensus: Kings has good intentions, a talented cast, and the basis for an incredible fact-based story; unfortunately, they don't amount to much more than a missed opportunity.

KINGS stars Oscar winner Halle Berry and Daniel Craig as citizens of the same South Central Los Angeles neighborhood set against a backdrop of rising racial tensions during the verdict of the Rodney King trial in 1992. In her first English-language film following the critically acclaimed Mustang, writer-director Deniz Gamze Ergüven's KINGS tells a dramatic story of family bonds and the lengths one mother will go to bring her children home. Halle Berry stars as MILLIE, a tough and protective single foster mother of eight who must ally herself with OBIE (Daniel Craig), her neighbor and a local loose cannon, when racial tensions start to run dangerously high. As the civil unrest in Los Angeles grows following the acquittal of four of the officers accused of beating Rodney King, Millie and Obie must navigate the chaos that surrounds them in order to ensure her children's safety. KINGS focuses on the fragility of family relationships and touches on turmoil and tensions of the past, which sadly prove to be more relevant than ever in today's social and political climate.

Lorenz Arnell
as Damon
View All

This dud recreation of the 1992 L.A. riots traps Halle Berry and Daniel Craig and a piece of momentous, civil-rights history in a crazyquilt of random action, absurdist humor, bogus romance and questionable purpose.

It's possible to appreciate the film for recognizing both the horror and the absurdity in its subjects...and for playing exclusively in those extreme registers, yet still come to the conclusion that it's is all bark, no bite.

Kings is clueless about its subject matter.

It seems like a missed opportunity to dramatize the lives of real people caught up in the aftermath of the violence.

The English-language debut from the brilliant talent behind best foreign film picture nominee Mustang is a terribly uneven, borderline absurdist jumble that undercuts its own message again and again.

Frustrating and tone-deaf, the movie remembers the L.A. riots as an absurd comedy.

A timely look at race relations in America dating back almost three decades, Kings is a cinematically impressive film with a messy, stunted script.

Indeed, the film's uneven approach is difficult to engage with, but [Deniz Gamze] Erguven has made an audacious movie that vividly places the audience at ground zero in history.

Kings is a clumsily etched portrayal of a dark chapter in history, which is more likely to confuse than educate.

'Kings' is the king of incoherence. [Full Review in Spanish]

The film's worst sin is not that it's a middling movie. It's that it adds nothing to an urgent and ongoing dialogue.

Although it's set against the backdrop of the 1992 Rodney King riots, the film fails to capture the real anger of a city divided.

There are no featured audience reviews yet. Click the link below to see what others say about Kings!