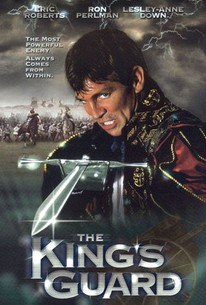 In medieval times, dashing Captain Reynolds (Trevor St. John), the commander of the king's elite guardsmen, is ordered by the queen (Lesley-Anne Down) to go undercover to protect Princess Gwendolyn (Ashley Jones) who is traveling through territory made dangerous by irate renegade subjects. It's not long before Reynolds and the princess' entourage are chased into hiding in an abandoned ruin, where the small band of guardsmen plan their escape. Meanwhile, a growing army of renegades surrounds the ruin and prepares to attack at the command of Augustus Talbert (Eric Roberts), a vengeful fallen nobleman snubbed by the princess. Meanwhile, the feisty Gwendolyn has met her romantic match in Reynolds, which only infuriates Talbert all the more.

Lesley-Anne Down
as Queen Beatrice

Critic Reviews for The King's Guard

There are no featured reviews for The King's Guard at this time.