Kings of the Evening2010 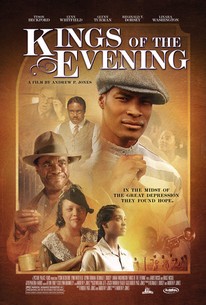 Kings of the Evening Photos

This independently produced drama from director Andrew P. Jones travels back to the Great Depression of the 1930s. It tells the sad saga of Homer Hobbs (Tyson Beckford), a young African-American man who wraps up a two-year jail sentence and returns home to his dead-end small town with a complete lack of prospects. Instinctively, Homer develops a rapport and begins to stick together with four other people roughly in the same boat as he is: Clarence (Glynn Turman), a zero who longs to be someone significant; Gracie (Lynn Whitfield), a down-and-out boarding-house owner who harbors a shocking secret; Benny (Reginald T. Dorsey), a street hustler who plans to relocate to sunny Florida and start afresh; and Lucy (Linara Washington), a woman whose scandalous past threatens to destroy the lives of those around her.

Charles Quiett
as Al the Bartender

Ada Harden
as Woman in House

Critic Reviews for Kings of the Evening

Kings of the Evening is a warm, beguiling picture boasting an array of splendid portrayals

Well-meaning, well made and all but allergic to subtlety.

An intrusive musical score and periodic fades to black, as for commercials, make this feel as if it were made for TV, but otherwise it's exceptional, from script and performances to production design.

A sweet tale well suited to the holiday season.

Its plot choices are often shamelessly manipulative, but its cast is uniformly likable and easy to root for.

It moves briskly but leaves room for the stellar supporting cast to turn stock figures into appealingly shaded characters.

The film benefits from an impressive cast. Given enough time, word of mouth could build a good-sized audience for this absorbing drama.

The actors strike home quietly in scene after scene.

An anachronistic rip-off which implies that the idea of male beauty pageants originated with African-Americans in the 1930s, instead of with Zulus in the 1990s. Is the film otherwise worthwhile? Yes, but it still weirded me out.

Audience Reviews for Kings of the Evening

Simplistic period film about a man just being released after two years on a chain gang during the Great Depression, who heads home to try to start over again, only to find the town struggling through hard economic times. While staying at a rundown boarding house, he makes new friends, who try to make life better through weekly competitions at a local dance hall. Cloying, but not without its charms. It's effortless likable, but ultimately direct to DVD fare.

Kings of the Evening Quotes