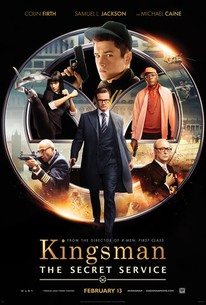 Based upon the acclaimed comic book and directed by Matthew Vaughn (Kick Ass, X-Men First Class), Kingsman: The Secret Service tells the story of a super-secret spy organization that recruits an unrefined but promising street kid into the agency's ultra-competitive training program just as a global threat emerges from a twisted tech genius. (c) Fox

Tom Prior
as Hugo

It's basically Harry Potter with spies.

Newcomer juvenile lead Taron Egerton -- handsome, bright, Welsh -- has promise. He should be moved in the direction of a good movie.

If ever there was a semi-entertaining movie that sabotages itself with tastelessness and misogyny, this is it.

On Day One of filming, they must have thrown away the moral compass and taken a group vow to splatter our sensibilities with stylish, gratuitous violence and one "Wait, what?!" moment after another.

Any sense of triumph is purely at the level of stuntcraft. The rest feels less than the sum of the moving parts.

I liked Kingsman: The Secret Service because the film refuses to take itself too seriously. There's cool worldbuilding, and I want to see more of it.

If you always wanted to see Firth take Bond's cool demeanor, toss in Jason Bourne's fighting style, and 'Running Man's body count, then 'Kingsman' is the movie for you.

A witty, entertaining spy romp that also manages to sneak in a serious message.

It is difficult to see how much more he can push the envelope before even the not-easily-shocked Galahad might think it was too farfetched.

A stylish new take on the spy thriller genre features a staunch Colin Firth and a cheeky Taron Egerton.

A very British spy/comedy movie that entertains. Colin Firth is most definitely the man for the job!

Matthew Vaughn delivers the suit in Kingsman: The Secret Service. Gliding in at just past the 2 hour mark, the plot's combination of violence, humor, and style raise the entertainment and lower the seriousness. While staying grounded from time to time, the film also manages to go over the top on numerous occasions. The action is violent and stylized, leading to candy for the eyes. The blood content is a little light considering the violence, but acceptable none the less. While Taron Egerton does an amusing job with his character, it's Colin Firth that carries the movie. Mark Strong does what his last name suggests; provide a strong supporting character. Kingsman: The Secret Service blends its different genres together in amusing fashion. I'll take the Big Mac.

An exhilarating and subversive homage to old spy movies that boasts a smart and hugely entertaining plot, a great cast (Jackson is hilarious), a fabulous production and costume design, and a deliciously stylized violence that makes this the Kick-Ass of spy movies.