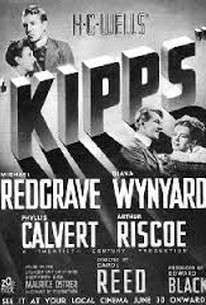 Carol Reed directed this adaptation of the H.G. Wells novel about a British shopkeeper who inherits money and tries to crash society; it was later the basis of the Tommy Steele musical Half a Sixpence. Michael Redgrave is Arthur Kipps, a nondescript storekeeper who finds himself heir to a large fortune. Society golddigger Helen Walshinham (Diana Wynyard) immediately comes on the scene, hoping to trick Kipps into marrying her. Right before the wedding, Kipps gets cold feet and instead runs off with his childhood sweetheart, Ann Pornick (Phyllis Calvert). The two get married but Ann wants to live simply while Kipps continues to want to live large with his inherited fortune. ~ Paul Brenner, Rovi

Phyllis Calvert
as Ann Pornick as a woman

Philip Sydney Frost
as Arthur Kipps as a boy

There are no critic reviews yet for Kipps (The Remarkable Mr. Kipps). Keep checking Rotten Tomatoes for updates!

There are no featured reviews for Kipps (The Remarkable Mr. Kipps) at this time.