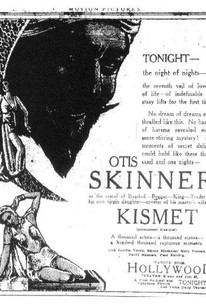 Edward Knoblock's warhorse theatrical piece Kismet, first filmed in 1920, resurfaced as a talkie in 1930. Repeating the role he'd created on stage in 1911, Otis Skinner stars as Hajji, the wily Baghdad beggar who goes from rags to riches to rags again to riches again in the space of 24 hours. Outwitting the evil wazir (Sidney Blackmer), Hajji manages to install himself in the royal palace, romance the wazir's gorgeous "head wife," and arrange the marriage between his own daughter (Loretta Young) and the caliph's son (David Manners). Though well on in years, Skinner conveys much of the effortless charisma which had endeared him to audiences since the turn of the century. Kismet was remade in 1944 with Ronald Colman and Marlene Dietrich; the popular Broadway musical version was brought to the screen in 1955, with Howard Keel as Hajji. The subsequent film versions have kept the 1930 Kismet out of television circulation, denying future generations the pleasure of watching the legendary Otis Skinner in action. ~ Hal Erickson, Rovi

Montagu Love
as The Jailer

Richard Carlyle
as The Muezzin

William Walling
as (uncredited)
View All

The dialogue is competently handled, so that, while the spectacular episodes are eye-filling, the story always holds one's attention. There are huge settings of the palace and the dungeons, the size of which enhances the value of the action.

Mr. Skinner furnishes another example of artistic acting in this film, in the crafty wit of the beggar, his mingled arrogance and obsequiousness, his rapacity, and cunning.

The opulent and extensive splendour of the production may do something to remove the advantages of concise unity or to make them inappropriate, but even so a little precision is something for which to be thankful.

The experiment of adapting such a notable stage success as Kismet to the talking screen has proved an outstanding success in the case of the film of that name.

The only remaining element that might give interest to Kismet is the able performance of 72-year-old Otis Skinner in the role he first acted 19 years ago. The rest of the players are indifferent and the play itself is pretty well outdated.

Mr. Skinner is altogether superb, as everyone must have expected he would be. But the handicap of an absurdly lavish, moviesque production proves a little too much for him.

There is no denial as to its artistic worth; it has been produced most artistically, and Mr. Skinner does as good acting in it as he did on the stage.

The settings of the screen version are extraordinary in art and lavishness.

The film Is unusual, and brings to the screen a striking and compelling personality.

[Otis Skinner] is, as ever, perfect as the charming rogue.

There are no featured reviews for Kismet at this time.